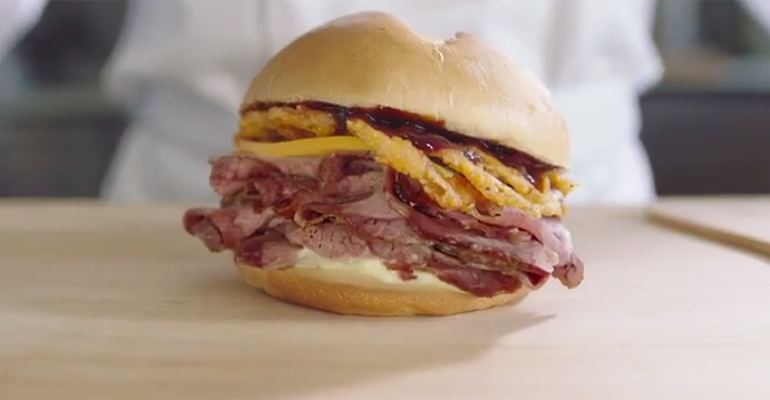 New commercials emphasize that the chain has more than roast beef

Arby’s is taking a new tack in promoting its non-roast beef sandwiches with two commercials launching Sunday in which the chain’s fictitious Head of Sandwiches laments the fact that he is underappreciated.

Played by H. Jon Benjamin, best known as the voice for man-child Sterling Archer in the animated sitcom Archer, the chef strolls through his corporate kitchen in the 30-second spots expressing mild outrage that consumers don’t understand the breadth of the Atlanta-based chain’s culinary portfolio.

“Why do people think Arby’s is just roast beef when we have 17 other sandwiches?” He asks in one commercial.

“Oh, I don’t know, maybe it’s all those 60-foot signs that say, ‘Arby’s Roast Beef Sandwich is Delicious,’ or maybe it was because the last time you went to Arby’s you were with your grandparents, who ate exclusively roast beef every meal, somehow.”

In the other spot, the Head of Sandwiches roams the kitchen saying that most people still think Arby’s only serves roast beef sandwiches.

“If that’s the case, we sure have a lot of odd-looking roast beef sandwiches,” he says, pointing to sandwiches like the smoked brisket sandwich, the Reuben and the gyro.

Arby’s chief marketing officer Jim Taylor said in an email that the campaign is designed to underscore the chain’s extensive offerings.

“The thought-process behind Arby’s new ad creative is simple — we want to ensure our guests know about the unmatched variety of sandwiches we offer,” he said. “We noticed our heaviest users come to us not just for our iconic Roast Beef, but for the 17 other types of sandwiches on our everyday menu. … We really wanted to highlight our sandwich variety, especially to those who haven’t visited Arby’s in a while,” he added.

A company spokesperson said the Head of Sandwiches campaign would continue for the foreseeable future with more spots to come.

Since Roark Capital Group bought a majority stake of Arby’s from Wendy’s parent company in 2011, the roast beef specialist has playfully embraced into its reputation as a stodgy old chain — management sent food to the staff of The Daily Show when then-host Jon Stewart took jabs at Arby’s food. The move won him over enough that Arby’s CEO Paul Brown made a cameo appearance on Stewart’s last show.

The chain of more than 3,200 restaurants, now a part of Inspire Brands, headed by Brown and majority-owned by Roark, has since rolled out a wide variety of meats, including the permanent addition of smoked brisket and a lamb-based product for its gyro sandwiches. It also has carried out meat-related stunts, including the Meat Mountain, an off-menu sandwich comprised of all of Arby’s meat offerings on a bun, and the offering of venison sandwiches as extremely limited-time offers of a day or less.