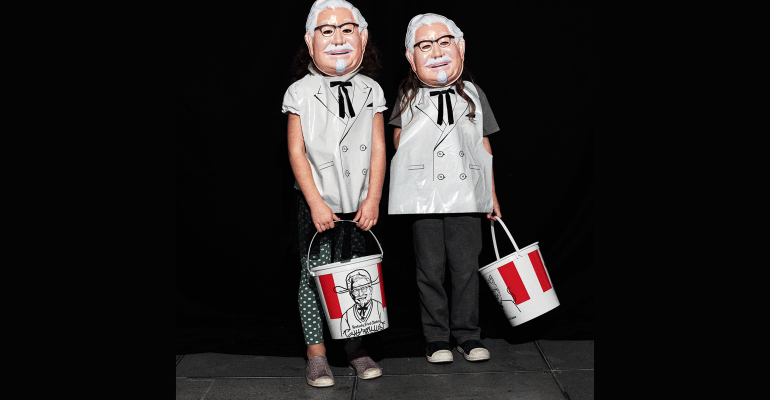 For 5 bucks, you could be KFC’s newest Col. Sanders

KFC has a new colonel: trick-or-treaters.

The Louisville-based chicken chain, which has spent recent years working its famous founder, Colonel Sanders, into everything from socks to the company’s newly designed restaurants, is now offering Colonel Sanders Halloween costumes.

The chain is selling “Halloween Harland,” a plastic Sanders mask and a vinyl bib made to look like the Colonel’s famous white suit, for $5 on its KFC Limited website.

The $5 price tag is, perhaps not coincidentally, the same as the chain’s $5 Fill Ups meal that has helped improve sales in recent years.

In addition, the company is offering limited edition trick-or-treat buckets. The buckets come in five different designs with the Colonel dressed as a mummy, an astronaut, a cat, a firefighter, pirate, cowboy, werewolf, robot and vampire.

The buckets will be available starting on Friday, Oct. 27. Restaurants will give them away to “customers who show some Halloween spirit” and particularly customers in costumes.

KFC has been using Sanders as a primary marketing focus in recent years, beginning with a series of advertisements featuring comedians and actors like Darrell Hammond and Ray Liotta playing the chain’s founder.

Sanders is also prevalent in the chain’s new design, and the company has been selling products like socks and pillows with the Colonel’s image. More recently the chain developed a “GPS tape” with a Sanders sound-alike giving directions from Louisville — where parent Yum! Brands Inc. is based — to Georgia on a cassette tape.

The efforts have worked; KFC’s estimated unit volumes in the U.S. increased more than 11 percent between 2014 and 2016, according to NRN Top 100 data. Same-store sales have increased 12 straight quarters.

The company said that the costumes are designed to mimic the dime-store costumes kids wore in the 1970s and 1980s. The company called it “a nod to the brand’s heritage and its iconic founder” while the price makes it affordable.

The costumes have to be ordered by Oct. 23 to ensure they’re available for Halloween.