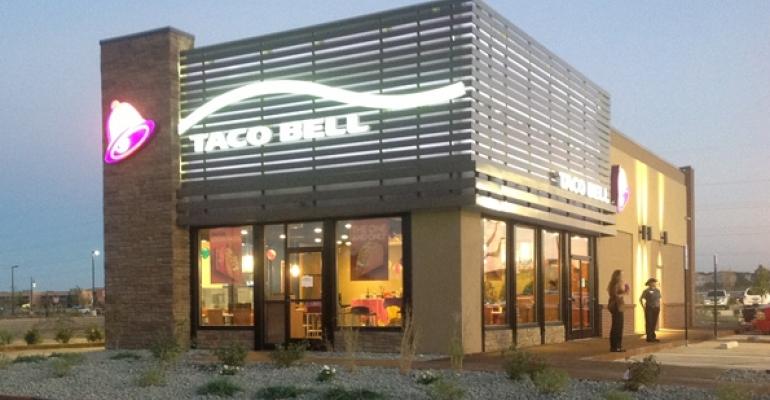 After making significant changes to its menu this year, Taco Bell is now looking to update its restaurant design.

Earlier this year, Taco Bell launched the new Doritos Locos Tacos line, which has been touted as the most successful product launch in the chain’s history. Later came the new Cantina Bell offerings developed by celebrity chef Lorena Garcia. Breakfast is also being rolled out,  and now the company is looking for a new look that would continue to communicate efforts to “be a better Taco Bell,” said Roberts.

One of the new prototypes opened in mid-September in Commerce City, Colo., where it will be available for franchisees to visit as they gather in Colorado Springs, Colo., on Oct. 7-10 for the annual FRANMAC franchisee association convention.

“We wanted a look that’s totally different, to show that we’re an upscale brand,” said Geller. “You walk in and it feels new and fresh.”

At 2,100 square feet, Commerce City is a medium-sized location. A large-format unit is under test in Redwood City, Calif., and a small-format footprint is being evaluated in Sanger, Texas, Roberts said.

One goal is to develop a design that will be more easily adapted to image changes in the future, said Roberts.

The units, for example, use a simple shell with an exterior façade that will be easier to manipulate in the event of future changes.

“Most franchisees have to do asset upgrades from time to time, and this makes it much easier because of the shell,” said Geller.

Inside, the new prototype offers a variety of seating configurations, from a lounge area with softer seating, to round “Bell booths” that seat seven, as well as counter seating for those waiting to pick up food.

“Consumers told us they wanted an environment where they could sit and stay a while,” said Roberts.

“Before we were more laugh-out-loud,” he said. “This look is more neutral with an explorer attitude.”

Taco Bell’s last major imaging project, dubbed “Bold Choice,” was rolled out to the majority of units in 2004.

Roberts said it’s too early to say when a new image campaign might be rolled out across the 5,600-unit system, or what elements will be included, as further evaluation is needed.

Geller, however, is enthusiastic about the new look in Commerce City, and said he’s ready to remodel existing locations.

“There’s no doubt in my mind people will love it,” he said.