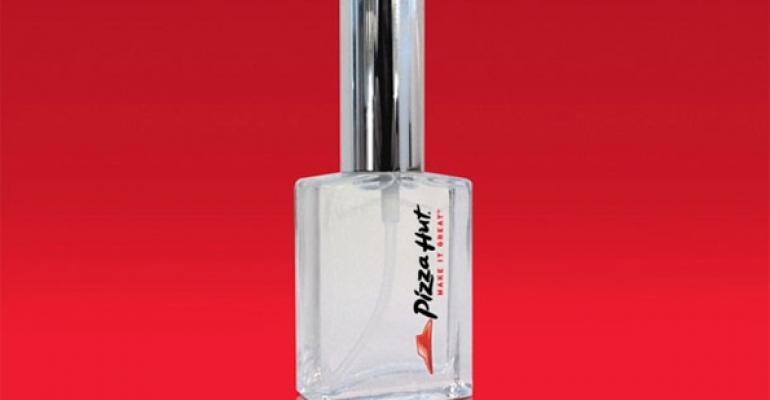 Through Wednesday, Feb. 13, the Dallas-based division of Yum! Brands Inc. each day will give away 24 of its Last Minute Lovers packages to winners selected from among Twitter users who Tweet @PizzaHut and include the hashtag #LastMinuteLovers.

The packages include a $20 Pizza Hut gift card and a bottle of Eau de Pizza Hut perfume, which was introduced in a limited promotion in Canada in the fall. The cologne has robust notes of fresh-baked pizza dough with undertones of pizza seasonings. Pizza Hut said the gift packages will be shipped to arrive on Valentine’s Day.

“Valentine’s Day gifts need to show your significant other how much they are appreciated, and our limited-edition Lovers Packages are the perfect solution,” said Pizza Hut chief marketing officer Kurt Kane in a statement. He also noted that the gift card could be used for the company’s recently debuted Big Pizza Sliders or for a “Lover’s” pizza, which features either cheese, meat, pepperoni or vegetables.

The Canadian branch of the chain launched Eau de Pizza Hut after it received positive feedback on the company’s Facebook page. Only about 110 bottles were created and sent to fans in the Canadian promotion.

At least one other restaurant chain has poked its nose into a signature scent.

Burger King in 2008 produced The Flame by BK, a body spray that was described as “the scent of seduction with a hint of flame-broiled meat.” For the scent’s 2009 introduction at Burger King in Britain, Piers Morgan, who now hosts a talk show on the CNN network, stripped down to a carefully draped piece of velvet to promote the spray in print advertising.

To gauge the popularity of last-minute Valentine’s Day gifts, Pizza Hut cited statistics from a 2012 study by the Chicago-based NPD Group that found 78 percent of celebrants purchased gifts for loved ones a week or less before Feb. 14. Forty-seven percent of men and 32 percent of women made those purchases on Feb. 13 or 14.

Pizza Hut said people living outside the 48 contiguous United States and the District of Columbia are not eligible to receive the #LastMinuteLovers gift package. The company also said each day an average of one person per hour will receive the package.