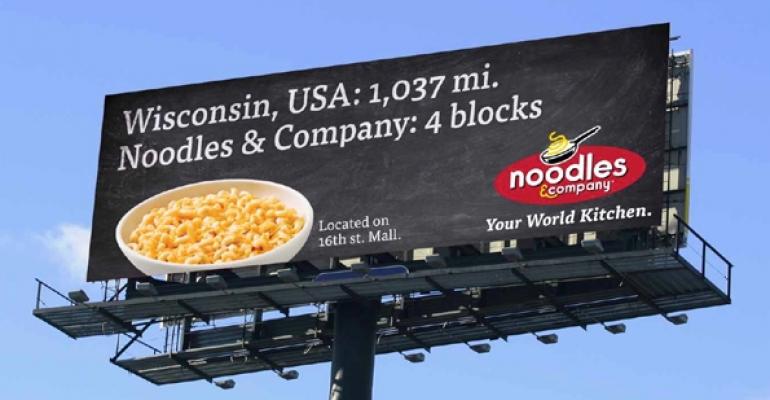 The new campaign will feature the rollout of menu boards that show photos of new dishes.

Broomfield, Colo.-based Noodles has selected TDA_Boulder to develop and execute a marketing campaign around the message “Your World Kitchen,” which aims to highlight the chain’s broad menu of cooked-to-order noodle dishes from around the globe.

The move comes at a time when Noodles is reportedly considering a public offering. A report earlier this month in the Financial Times said Noodles had been seeking advisors in December for a potential initial public offering. The report cited the news service Mergermarket, which attributed unnamed sources.

The article said the company is expected to file with the U.S. Securities and Exchange Commission either in April or after July 4, when the company could report expected earnings for the following year.

Noodles & Company executive vice president of marketing Dan Fogarty said he could not comment on the report.

Cheddar’s reportedly made a “confidential” filing toward an initial public offering last year. Federal legislation signed into law last year allows companies of a certain size to file confidential statements with the SEC prior to an IPO.

Getting the word out 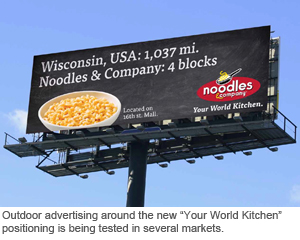 Noodles has traditionally relied on word-of-mouth and grassroots marketing, and that emphasis will likely continue, Fogarty said. The tests in the three markets are more to learn what works best in terms of possible media mix, he said.

Over the past several months, Noodles has been making changes to better convey its menu variety and cooked-to-order options.

The chain is known for its pasta dishes — from spaghetti and meatballs and Indonesian peanut sauté to steak stroganoff and Japanese pan noodles — as well as sandwiches, soups and salads. But, “We weren’t getting credit for how good our food is,” Fogarty said.

The roll-out of new menu boards that show photos of each dish has been key in that effort. Previous menu boards offered written descriptions, but “People would have to stand in front of the menu boards and try to read it all,” Fogarty said.

The new menu boards are not digital, but chalkboards with photos posted on them, which he said gives the menu a “more handcrafted” feel.

Units with the new, more visual menu boards are seeing a mid-to-high single-digit increase in sales, along with an overall shift in the menu mix without any change in the menu itself. “People are saying, ‘Wow, when did you add all of this to your menu?’” Fogarty said. “They may come in for the mac and cheese, but they see the menu boards and end up trying the Bangkok Curry, which they may not have known we had.”

The second phase of the rebranding will likely include a refresh of interiors, but the chain is still rolling out the new menu boards, which are in 70 to 80 percent of Noodles’ more than 300 locations.

The chain has also been testing various service format variations, including not-quite-full-service in the evenings to build dinner sales and improve the customer experience.

Other elements include new appetizers and a test of plated desserts, and an upgraded wine and beer program with new glassware.

Last year, the chain also rolled out new slow-braised, naturally raised pork as a protein option for the menu.