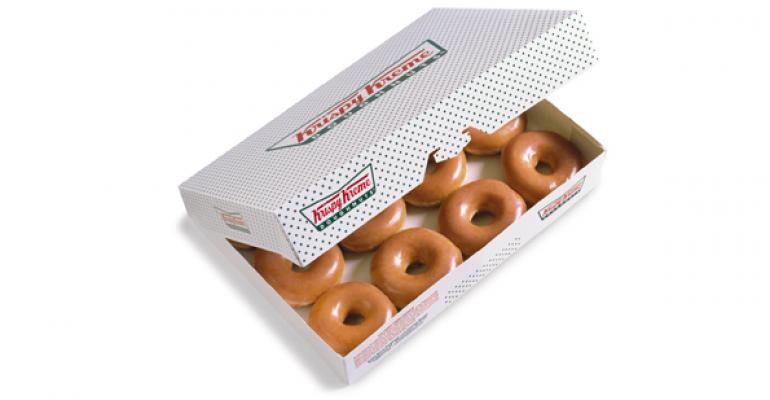 “Lose An Hour, Gain A Doughnut!” promotion aims to bring brand to top of consumers' minds

Krispy Kreme will give out free original glazed doughnuts to guests for daylight saving time this Sunday in a promotion called “Lose An Hour, Gain A Doughnut!”

The promotion is an attempt to thrust the doughnut brand to the front of consumers' minds while helping to ease the effect of losing an hour of the day, according to Dwayne Chambers, chief marketing officer at Krispy Kreme Doughnuts Inc.

“Everybody hates this day, because something has been taken from them,” said Chambers. “A lot of people are grouchy…We try to come up with excuses and occasions for people to eat a doughnut.”

Single-day promotions such as this one, he added, are intended to put people in a good mood — to remind them just how much they love coming to Krispy Kreme. The brand scores high on brand awareness, Chambers said, but that doesn’t mean it's always top of mind for consumers.

“We do these things and people think about us again,” he said. “It makes people say ‘Wow, I need to get back and do that more often.’”

During the Winston-Salem, N.C.-based company’s earnings call Nov. 19, the company cited that single-day promotions, like National Talk Like A Pirate Day and National Coffee Day, gave the brand a performance edge during the third quarter.

During the week of the pirate holiday — on which the company gave customers free doughnuts for wearing eye patches and saying “arrrrgh” — same-store sales rose 6 percent.

“Those promotion days are usually good,” said Krispy Kreme chief executive James Morgan at the time. “It’s high, high traffic, as you know…but then the after-effect seems to last longer than we would have thought.” The promotions are fun, but they’re also good business, he noted.

“Over time, it continues to work because people continue to be excited about another excuse to eat donuts,” Chambers said, adding that his company plans to continue announcing single-day promotions throughout 2013.