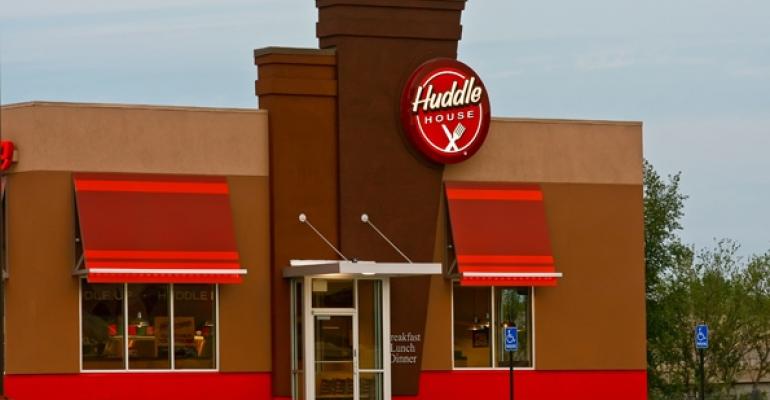 Huddle House is redesigning its restaurants with a signature tower entrance, plush seating and contemporary colors, and the efforts are already paying off.

“Most importantly, our customers are responding through increased visits,” said Huddle House chief executive Michael Abt. “The new design helps to promote stronger value to our customer.”

When Abt took over the top position at the Atlanta-based family-dining chain in October, he said he knew the brand was ripe for growth. By April 30, the end of the company’s 2013 fiscal year, Huddle House will have signed 26 new locations.

“We see ourselves as a nimble brand,” he said, adding, “our plan calls for 90 percent of our system to be reimaged by 2017.”

At the end of March, the company plans to launch a franchise remodel program, which intends to incentivize Huddle House franchisees to redesign their restaurants, Abt said. One incentive will be third-party financing, which the company has never previously offered.

“I think our value proposition is very strong,” he said. “I think, more than ever, our team is really focused on supporting our franchise partners.”

Specific details about the plan should be released within the next three weeks, he said.

In addition to the redesigned locations, limited-time offers are also a prime way Huddle House drives sales, Abt said.

“LTOs help us create news about the brand,” he said. “We don’t want to have to add items to the menu. We don’t want to end up with a bloated menu that’s difficult to execute.”

A recent offer included a prime rib tip dinner, a bacon-wrapped sirloin dinner and a Philly cheese steak. The promotion, with items starting at $5.99, contributed to an 8-percent boost in sales, he said.

The company also launched a promotion of seven meals for $3.99. The menu items, which span all dayparts, make up about 5 percent of the company’s sales mix, Abt said.

“We’re getting ready to launch a line of really amazing shakes here in the spring,” he said, noting that Nutter Butter and Oreo flavors will be featured alongside more traditional chocolate, vanilla and strawberry.

“We like to refer to LTOs as seasonal items,” he added.

Huddle House’s menu spans all dayparts, but 65 percent of sales fall into the breakfast daypart, Abt said. The brand has room to build out lunch and dinner offers, too, he said.

Huddle House currently has 400 restaurants, about 45 of which have been reimaged in the company’s new unit design. Ninety-eight percent of the Huddle House system is franchised.