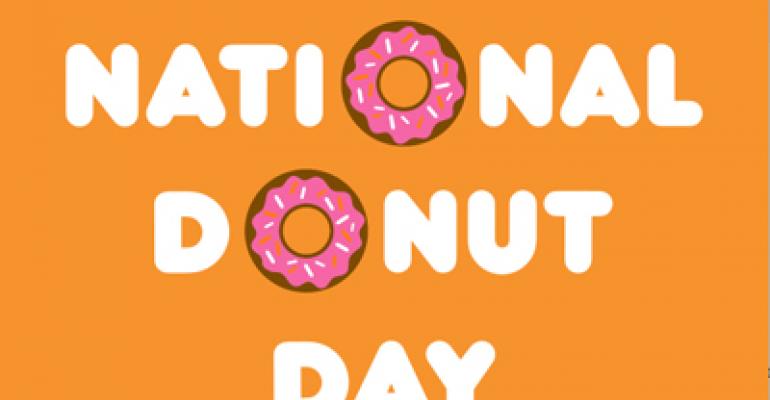 The digital, interactive billboard puts the quick-service chain in “the crossroads of the world”

Executives rang the opening bell of the Nasdaq stock exchange in New York at a ceremony in Times Square, where the chain also unveiled its new digital, interactive billboard. Nasdaq helped celebrate the day by changing its logo temporarily to read “NASDDAQ” with the brand’s signature pink and orange D’s, as well as a doughnut in place of the Q.

Dunkin’ Donuts also executed a systemwide giveaway of a free doughnut with the purchase of any beverage. The brand supplemented those activities with the National Donut Day Twitter Sweepstakes, offering six $50 gift cards to Twitter followers who correctly answered trivia questions about the brand’s history.

The brand will follow up its big one-day marketing push with a steady output of new product introductions and marketing campaigns, executives said.

“We’re always looking for fun opportunities to say thank you to our guests,” said John Costello, chief global marketing and innovation officer for Canton, Mass.-based Dunkin’ Brands Inc., Dunkin’ Donuts’ parent company. “You’ll see a constant stream of innovation on the marketing front and the product front from us.”

Beyond National Donut Day, guests will be invited to take pictures of themselves with Dunkin’ Donuts coffee and baked goods and upload those photos to the brand’s Facebook page. One of those people will be chosen every day as Dunkin’ Donuts’ Fan of the Day and have their picture and name “up in lights” on the Times Square billboard.

Costello said the investment required to make its billboard — which weighs 14 tons and has 1.6 million LED lights — digital and interactive was justifiable given the billboard’s ability to rotate photos of new product introductions as well as its prime location in Times Square, which he called “the crossroads of the world.”

“The digital billboard gives us the opportunity to communicate with guests in the New York area, which is a huge market for us, and the millions of travelers and tourists who visit,” he said. “It’s an iconic location and is featured in movies, TV shows, news reports or just somebody’s family photo.”

In addition to Dunkin’ Donuts products, the billboard also will promote the chain’s tie-in with the new “Men in Black” movie, as well as the Broadway play by Harold Prince, “Prince of Broadway: The Musical of a Lifetime.”

Prince helped chief executive Nigel Travis ring the Nasdaq’s opening bell Friday morning. Dunkin’ Donuts included him in National Donut Day after Prince sent a letter to the chain a few months ago complaining of the blandness of its previous, nondigital billboard in Times Square.