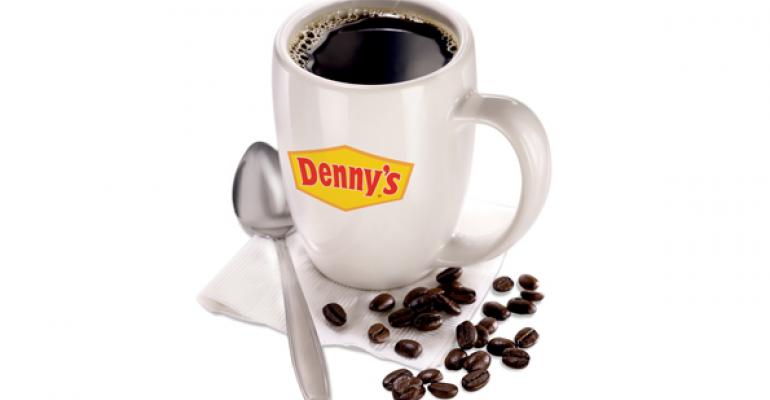 In fiscal 2013, Denny’s plans to continue to drive branding as “America’s Diner,” and to highlight the company’s value proposition to consumers, according to president and chief executive John C. Miller.

“Clearly, consumers think about value in different ways,” he said during a question-and-answer session with analysts. “Value is associated with every transaction. Whenever you make a decision to go to lunch, dinner, late-night or breakfast, whatever the occasion, it's, ‘How best does this place meet my needs?’”

Developed during the two years prior to its launch, Denny’s introduced an upgraded coffee program in early 2013. “Frankly, the bar has been raised by quick service and fast casual, [and] we were falling short,” Miller said. “Given that we sell nearly 90 million cups of coffee a year, we wanted to raise the bar for full-service dining.”

Additionally, Arabica beans and coffee commodities were in Denny’s favor. “Timing could not have been better,” he added.

Value and offerings beyond breakfast would also be key to continued growth in 2013, he added. “We're trying to broaden the number of ways in which people think about Denny's with our breakfast and beyond breakfast strategies,” he said. “And one of those is price value through $2 $4 $6 $8 Value Menu, but also abundant value like the skillet bundled meals.”

“As the largest family-dining chain, we will continue to introduce more compelling marketing modules and classy diner plates,” Miller said.

For the Dec. 26, 2012-ended fourth quarter, Spartanburg, S.C.-based Denny’s reported after-tax net income of $6.5 million, or $0.07 per share, compared with $92 million, or $0.94 per share, in the year-earlier period. Net income decreased significantly from the prior year due in part to more than $89 million in net deferred tax benefits Denny’s recorded during the fourth quarter of 2011.

Before taxes, Denny’s recorded net income of $9 million during the quarter, an increase from $7.1 million in the year-earlier period.

Revenue for the quarter was approximately $116 million, compared with $130.2 million the year prior.

In 2013, Denny’s projects systemwide same-store sales growth between 0 percent and 2 percent, the company said in a statement, with net restaurant unit growth of five to 10 restaurants.

The company opened 40 new restaurants in 2012, six of which were international. During the past six years, Miller said, the brand has averaged closing 34 units per year, or about 2 percent of the Denny’s system.

Denny’s has more than 1,600 locations systemwide.