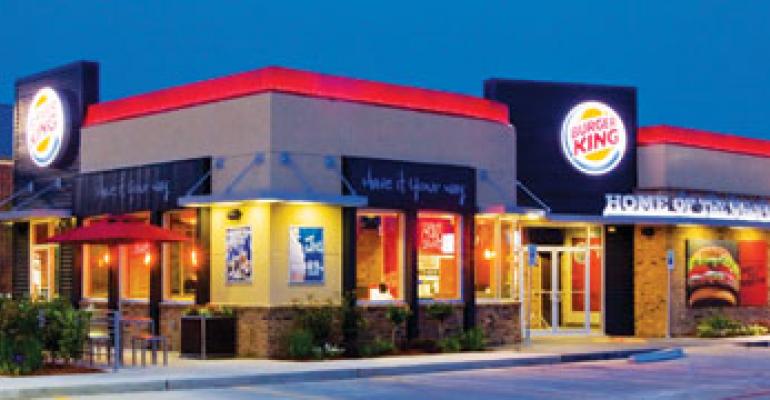 Burger King marked its return to the stock market Wednesday, following the closure of a reverse merger with investment vehicle Justice Holdings Ltd.

In its first day on the New York Stock Exchange, the Miami-based burger chain's new parent company, Burger King Worldwide Inc., traded under the ticker symbol "BKW." The stock opened at $14.50 per share, traded as high as $16.21, before slipping to close at $15.01.

In April, the company said the publicly traded Justice Holdings, based in the U.K., had agreed to take a 29-percent stake in Burger King for $1.4 billion. Current owner 3G Capital, which had only just taken the chain private in October 2010, retained a 71-percent stake.

Justice Holdings was created in an initial public offering in early 2011 by a group that included William Ackman, chief executive of hedge fund Pershing Square Capital Management. The deal came at a time when Burger King’s status as the No. 2 burger chain in sales behind McDonald’s was slipping behind Wendy’s. However, turnaround efforts by 3G over the past two years appear to be taking hold.

Burger King also in April debuted its biggest menu expansion in its 58-year history, adding premium salads, snack wrap sandwiches, fruit smoothies and chicken strips — which in some ways brought the menu more in line with that of segment leader McDonald’s. The new menu launch was accompanied by a celebrity-focused marketing campaign, featuring stars like soccer stud David Beckham and Aerosmith’s Steven Tyler, that boosted consumer awareness and attempted to broaden the burger chain’s audience beyond its previous target of young men.

Securities analyst Conrad Lyon of B. Riley & Co. said, “The sentiment is that Burger King is starting to market share from McDonald’s, but it’s been so far removed from being a real competitor in the space, there’s a lot of runway in front of them.”

Lyon said he was impressed by the innovation in Burger King’s more recent summer promotion of a line of barbecue-inspired sandwiches, like Memphis-style pulled pork and regionally themed twists on Whoppers — as well as a headline-grabbing ice cream sundae made with bacon.

Burger King's goal is to reduce capital expenses and vulnerability to cost pressures while building royalty revenues and freeing management to focus on rebuilding the brand, international expansion and marketing, the company said in filings with the Securities and Exchange Commission. In May, for example, Burger King sold 278 company-owned units to the chain’s largest franchisee, Carrols Restaurant Group Inc., based in Syracuse, N.Y. In return, Carrols agreed to remodel 450 of its locations within about three years.

Looking internationally, last week Burger King announced a joint venture that will bring 1,000 units to China. Similar deals have also been announced for Russia and Brazil.