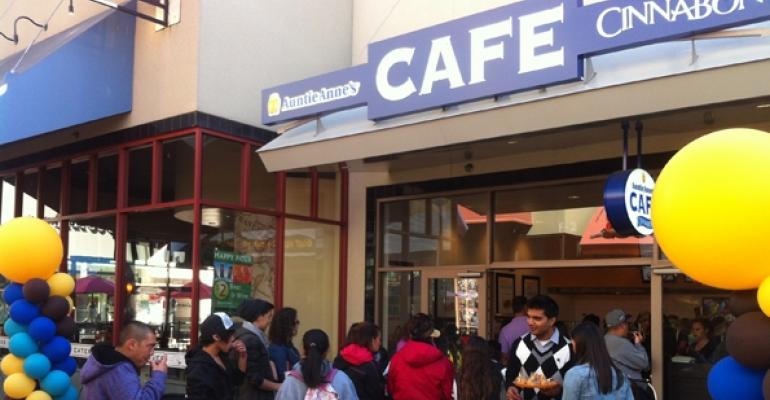 Auntie Anne’s and Cinnabon are both owned by Atlanta-based Focus Brands Inc., the parent company of Moe’s Southwest Grill, Schlotzsky’s and Carvel.

Neary said the company prefers to think of the newly combined concept as a “co-blend” rather than a “co-brand.” Not only do the brands share the same retail space, but they also share the same registers, menus and employees.

“We wanted to see if we could literally blend the concepts,” said Kristen Hartman, vice president of marketing at Cinnabon. “The reason we’re so excited about this is that it really gets us into other dayparts.”

The co-blended locations are designed for shopping centers, Hartman said, so it’s important to be able to cater to consumers’ needs throughout the day — from early shoppers to mall employees who may work later at night.

The new units offer Cinnabon’s full café menu, she said. The menu had previously been offered in different iterations at about 10 Cinnabon locations, and includes breakfast sandwiches and paninis, as well as the brand’s beverage line.

“We’re sort of in a test phase,” she said of the café menu. “Since Auntie Anne’s is a sister company, we wanted to see if there were additional ways we could partner.”

Some savory Auntie Anne’s items are also on the co-blended menu, including an expanded line of premium pretzel hot dogs, Neary said. They include a Coney Island dog with chili and cheese, a Chicago-style dog, and a Cheddar bacon dog, she said.

“It takes one of our core menu items and makes it more of a meal,” she said.

In addition to the menu expansion and testing, the rising cost of real estate in some retail locations prompted the co-blended concept, Hartman said.

“There are just certain mall environments where the rents are very high,” she added.

The company plans to open four more Auntie Anne’s Cinnabon Cafés in 2013: two in New Jersey, one in South Carolina and one in Pennsylvania. “We hope to have them open between now and May,” Neary said.

Both Neary and Hartman said they were encouraged by sales so far at the co-blended locations.

“We’re really excited about the concept and how it helps us evolve both of the brands,” Hartman said.

Auntie Anne’s has about 1,300 locations, while Cinnabon has 1,000 locations systemwide.