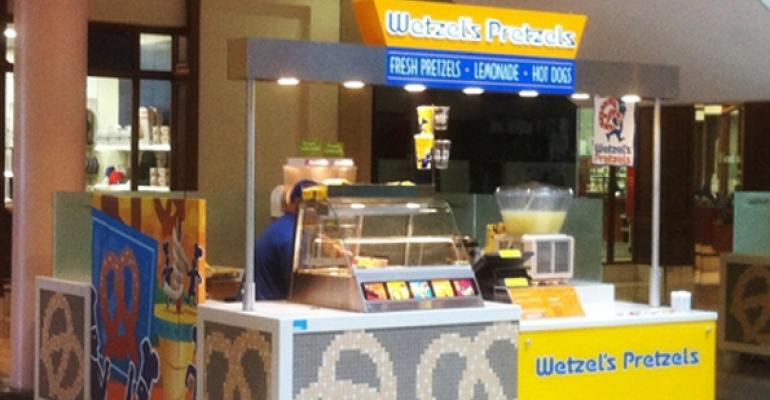 There was a time when guests could walk into most American shopping mall food courts and find the usual lineup of brands represented — but that scene is now looking different in a post-recession climate.

Some malls are pushing out national restaurant chains to focus more on local and regional brands. At the same time, some traditional food court brands are seeing the lack of development of new malls as a sign that it’s time to go elsewhere.

As a result, a number of restaurant chains that once looked to food courts exclusively are finding new opportunities outside the mall — or at least outside the food court.

Rosemead, Calif.-based Panda Express, for example, was a brand that saw rapid growth in malls initially, but now the 1,500-unit chain has only about 230 mall locations. Malls are still part of the mix, but the concept is more flexible, said Thien Ho, a Panda Express spokeswoman.

“Our focus remains on obtaining quality locations in the right trade areas, whether it’s in a mall or street store,” she said.

Other brands are also hoping to find that flexibility. Wetzel’s Pretzels, for example, is growing internationally and in nontraditional domestic locations, with units in Disneyland and in Walmart stores. This year, Wetzel’s Pretzels opened its first street locations, as well as units in train stations. Deals are also in the works to go into airports.

Mall locations are “still our bread and butter,” said Bill Phelps, the pretzel chain’s co-chief executive. “For 30 years, the press has been talking about how malls are dying. But the numbers in malls are not bad at all. Regional malls are actually doing pretty well these days.

“That said,” he added, “we are expanding beyond the mall.”

The competition in food courts has gotten tougher, Phelps said, especially when some malls have more than one pretzel brand.

To help franchisees who want to stay in the mall, however, the chain has also designed satellite kiosks that can move out of the food court area to supplement business. The 10-by-10-foot kiosks can do 60 percent to 65 percent of the business standard mall units do, without cannibalization, said Phelps.

Sbarro is also working on a next-generation unit design as it moves the brand into more of a fast-casual concept.

The “Sbarro of Tomorrow” is expected to be unveiled early next year, and the Melville, N.Y.-based chain also plans to shift new-unit development to include more urban, street-front locations, in addition to malls

Sarku Japan is another traditionally mall-based chain focusing more on non-mall locations. The Toronto-based company, which operates or franchises 231 units in 37 states, currently has about 17 freestanding units with plans to add three more before the end of the year.

The freestanding Sarku units offer an expanded menu that includes sushi and sashimi, as well as the brand's signature Teppanyaki menu.

Carlsbad, Calif.-based Hot Dog on a Stick this summer opened its first drive thru location, one of a number of test initiatives as the chain looks to break out of malls.

The drive thru unit in West Jordan, Utah, is also testing the addition of breakfast, with French toast sticks, hash browns and batter-fried sausage on a stick that can be dipped in syrup. Coffee and freshly squeezed orange juice are also on the menu. Two more drive thrus are scheduled to open this year.

With about 100 locations, almost all in malls, the chain is also looking to move into sports stadiums and casinos. After launching a franchising program this year, the first franchisee is scheduled to open a 24-hour Hot Dog on a Stick in the Excalibur Hotel Casino in Las Vegas in November.

Moving out of malls is not without challenges, said Dan Smith, Hot Dog on a Stick’s president and chief executive. A street location in an in-line shopping center that opened last year has had marginal success because the chain hadn’t done enough local marketing, Smith said.

Meanwhile, like Wetzel’s Pretzels, Hot Dog on a Stick is also developing opportunities to stay in the mall but not in the food court.