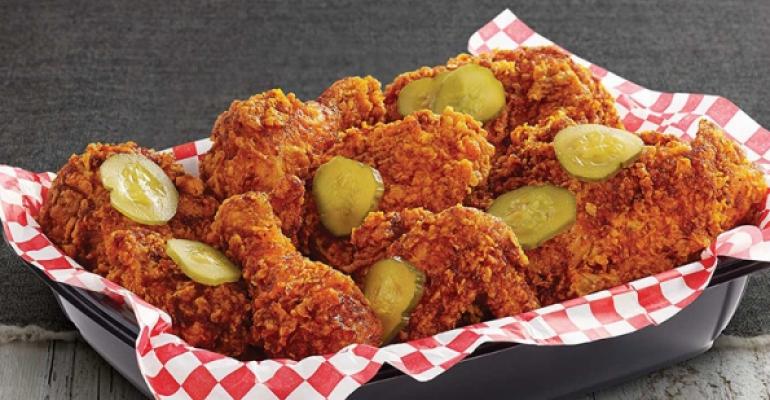 Jan. 18 launch is expected to spice up football playoff season

KFC’s new Nashville Hot Chicken is scheduled to roll out to all 4,300 restaurants nationwide on Monday, including a first-ever tailgate platter, in time for the run up to the Super Bowl.

The Louisville, Ky.-based chain has been testing the spicy Nashville Hot Chicken at 32 restaurants in the Pittsburgh area and said it has been the most successful product test in the company’s recent history. Prices start at a recommended $5.49 for a one-piece breast basket or a three-piece tenders basket, the company said.

Traditional hot chicken was pioneered by Nashville restaurant icons such as Hattie B’s Hot Chicken and Prince’s Hot Chicken Shack, but the style of marinating chicken in pickle brine, pressure frying and dousing it in a spicy hot sauce has been growing in popularity across the country.

Chef and TV personality Carla Hall of “The Chew” is launching a hot chicken restaurant in Brooklyn, N.Y. this quarter. In Los Angeles, the Howlin’ Ray food truck features Nashville hot chicken and is reportedly opening a brick-and-mortar location in February.

At KFC, the chain’s Extra Crispy chicken forms the base for the Hot Chicken recipe, which includes a Nashville hot sauce glaze spiked with cayenne and paprika. The result is a “perfect combination of spicy, smoky and crispy,” according to press materials.

The chicken is served with the traditional pickles, along with a biscuit and coleslaw, which helps cool the resulting slow burn from the fiery chicken. Special packaging will aid the dipping of the biscuit into the sauce – though in Nashville hot chicken is more typically served with a slice of white bread.

KFC’s Hot Chicken is available with bone-in chicken or as a tenders basket, including a 24-piece tailgate platter of tenders for a recommended $29.99.

Advertising to support the launch is scheduled to begin on Sunday during the NFL Playoffs, including ads featuring Norm MacDonald returning as Colonel Sanders traveling the world to find the best Nashville Hot Chicken recipe.

Over the past week, the chain has also sent a food truck serving its Nashville Hot Chicken to cities with some variation of the name Nashville in states where there is no KFC restaurant nearby. The truck started in Nashville Village, Ohio, for example, and is expected to finish the tour in Nashville Town, N.C. next week.

KFC is a subsidiary of Louisville-based Yum! Brands Inc.