Aggressive new-store development and high single-digit improvement in estimated sales per unit in international markets helped Starbucks Coffee best the growth pace of four other leading United States and Canada-based foodservice chains. The ranking is based on fiscal 2013 sales outside their home country.

Starbucks’ estimated systemwide food-and-beverage sales from markets outside the United States of $6.4 billion for the fiscal year ended September 2013 represented 19.6 percent year-over-year growth. That qualified the coffee chain for the Top 5 ranking by Nation’s Restaurant News. That roster also included McDonald’s, with reported outside-U.S. sales of $53.3 billion for fiscal 2013, and KFC, Burger King and Pizza Hut, with estimated international sales of $18.8 billion; $7.8 billion and $6.3 billion, respectively.

Though Starbucks concluded its fiscal 2014 in September, its fiscal 2013 results were included in this report for better continuity with the other chains, all of which had fiscal years ended on or near Dec. 31, 2013, as well as with the 2013 calendar-year results provided by Euromonitor International for other analysis elsewhere in this section.

Collectively, the Top 5 chains had fiscal 2013 international sales of $92.6 billion, which was up 2.7 percent compared with the preceding year. That growth was lower than the 4.3-percent gain the group notched a year earlier. Decreasing latest-year international estimated sales per unit for all brands except Starbucks, along with possible differences in the timing of new unit openings, were almost entirely behind the slow down. The group’s year-over-year growth in total locations was virtually identical at 7.2 percent for both fiscal 2013 and 2012. 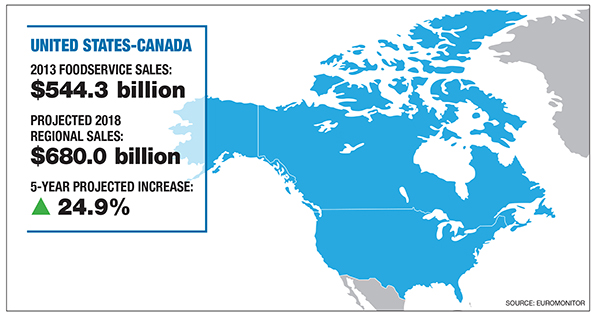 In contrast, the quintet’s aggregate fiscal 2013 U.S. sales rose by less than half of its international haul, or 1.2 percent, to $66.1 billion – a domestic total that underscores that McDonald’s, KFC and Pizza Hut now garner the majority of their systemwide sales from outside their country of origin. Total U.S. sales grew by 4.7 percent in fiscal 2012.

The overall roster of Top 5 U.S. or Canada-based parent companies, ranked by the international system sales of all of their chains, was unchanged this year, but did see some reshuffling. Starbucks’ strong fiscal 2013 sales growth moved it from the No. 5 position to No. 4, bumping down Subway parent Doctor’s Associates Inc. Holding the top three slots, in order of magnitude, are McDonald’s Corp.; Yum! Brands Inc., parent of KFC, Pizza Hut, Taco Bell, among its big chains; and 3G Capital Partners Ltd., majority owner of Burger King parent, Burger King Worldwide Inc.

All of the Top 5 brands and companies faced challenges of some sort in some of the many countries in which they operate – McDonald’s now reports being in “more than 100,” and Yum, accounting for all of its chains, says it is in “more than 125” countries and territories. But the comparisons of their group growth rates abroad, compared with those in their mature home market, provide an indication as to why they see continued international growth as a prudent business strategy. 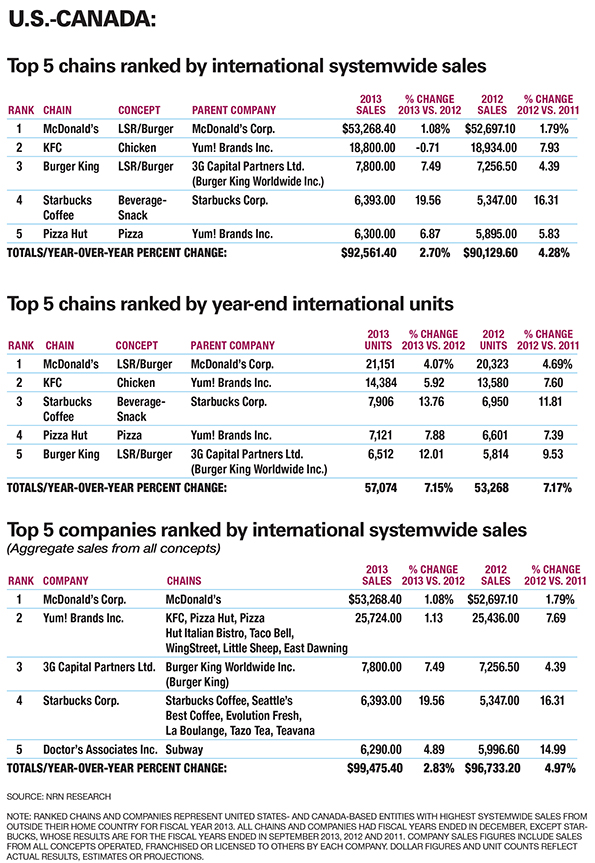 For its part, 3G Capital Partners recently upped its stake in international operations through the pending $11.4 billion merger of Burger King Worldwide Inc. and Canada-based Tim Hortons Inc., whose bakery-cafe chain had estimated fiscal 2013 worldwide systemwide sales of $6.7 billion from 4,740 locations. While Burger King will remain headquartered in Miami, and Tim Hortons in Oakville, Ontario, the reshaped parent company reportedly will set up shop in Canada.

Starbucks-parent Starbucks Corp., too, recently underscored its commitment to overseas operations by agreeing to the early buyout of its joint-venture partner in the 1,051-unit Japan market, The Sazaby League, in a deal valued at $913.5 million. Officials at Starbucks said the Japanese group generates about $1.2 billion in annual revenue and had grown same-store sales by about 4 percent in each of the past three years despite macroeconomic challenges in that country.

Starbucks’ fiscal 2013 international sales growth totaled 19.6 percent, compared with growth of 7.5 percent at Burger King, 6.9 percent at Pizza Hut and 1.1 percent at McDonald’s. An estimated 0.7-percent system-sales decrease at KFC primarily resulted from a reported 15-percent reduction in KFC China fiscal 2013 same-store sales, following a Chinese government’s investigation of one of the chain’s suppliers and an avian flu outbreak that worried consumers.

Related to growth in international units, Starbucks again led the pack, with a fiscal 2013 increase of 13.8 percent, to 7,906 company, licensed and joint-venture locations, which represented an improvement from fiscal 2012’s 11.8-percent gain. The top five actually upped its international new-store development game in fiscal 2013, with an average growth rate of 8.7 percent – compared with fiscal 2012’s 8.2-percent growth – on the way to tallying a latest-year total 57,074 locations.

In contrast to those foreign growth rates, their average growth in U.S. units was 0.5 percent and 0.4 percent in their latest and preceding fiscal years, respectively, with their fiscal 2013 domestic total reaching 45,208 sites.

Correction: Dec. 11, 2014 The data tables in this story have been revised to clarify that results are for the performance of U.S.- and Canada-based entities outside of their home countries.