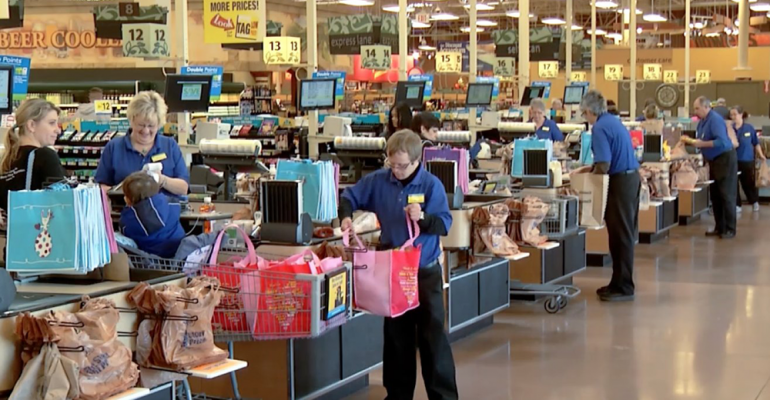 Kroger is tied for seventh in the lastest ACSI survey.
News>Grocery & C-Store

Customer satisfaction with supermarkets dipped over the past year amid an overall downtick for the retail industry, according to the American Customer Satisfaction Index (ACSI) annual report.

Trader Joe’s and Wegmans Food Markets, however, saw their satisfaction ratings increase, lifting them to the top of ACSI’s 2018 ranking for grocery stores, ahead of 2017 leader Publix Super Markets.

Released Tuesday, ACSI’s study surveys 300,000 U.S. consumers and rates retailers by a score of 0 to 100 on a range of service criteria. They include convenience of a store location and hours, staff courtesy and helpfulness, store layout and cleanliness, merchandise availability, and frequency of sales and promotions, among other factors. 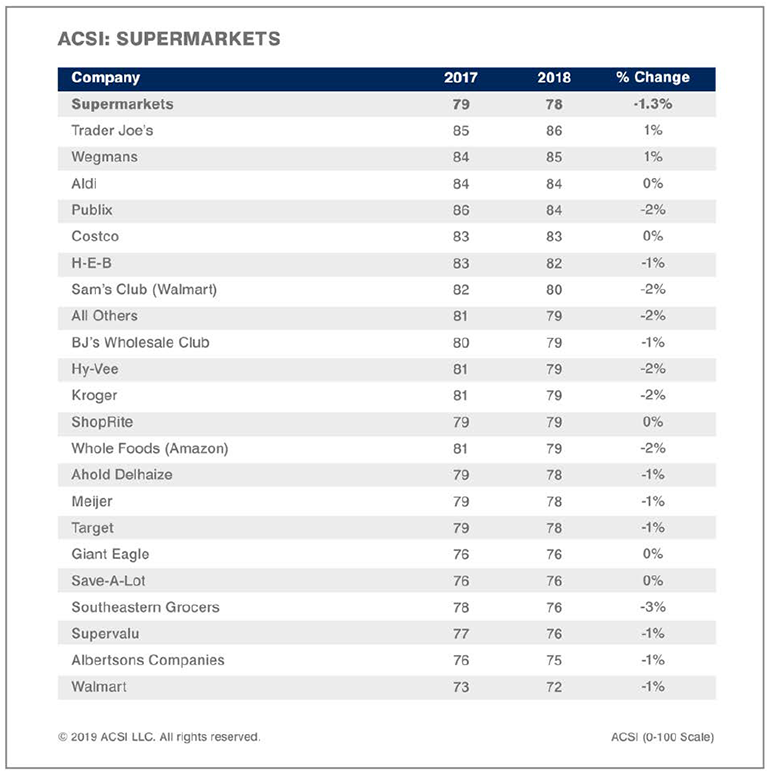 For 2018, the ACSI score for supermarkets fell one point to 78. That was slightly higher than the decrease for the retail trade sector, which scored 77.4 versus 78.1 in 2017 — the second straight year retail declined.

“Customer service is a strong point for Trader Joe’s, as the company rates best-in-class for checkout speed and staff courtesy,” Ann Arbor, Mich.-based ACSI said in its report.

Fifteen of the 21 grocery retailers ranked by ACSI saw their scores fall in 2018. Sam’s Club came in sixth at 80, yet parent Walmart finished at the bottom with a score of 72. BJ’s Wholesale Club, Hy-Vee, Kroger, ShopRite and Whole Foods Markets (Amazon) tied for seventh at 79.

“For Whole Foods, its acquisition by Amazon does not appear to have boosted the company in the eyes of its customers as satisfaction sinks 2% to 79.

Next at No. 8 — and below the industry average — were Ahold Delhaize USA, Meijer and Target with a 78 score, followed at No. 9 by Giant Eagle, Save-A-Lo, Southeastern Grocers and Supervalu with a score of 76. Albertons Cos. posted a score of 75, putting it just above Walmart.

“Southeastern Grocers loses the most ground, down 3% to 76. The company filed for bankruptcy in March 2018, shedding nearly 100 stores,” ACSI stated. “While a leaner Southeastern Grocers emerged from bankruptcy protection in June, its plans to remodel stores and launch a new loyalty program have yet to pay off in customer satisfaction.” 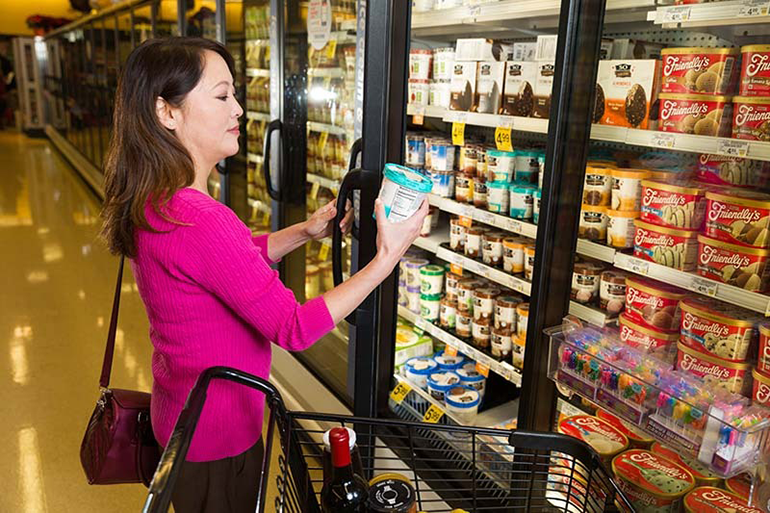 In terms of customer experience, supermarkets’ 2018 ACSI scores declined in 11 of the 12 criteria from 2017. The exception was for convenience of store location and hours, which was scored 85, the same as the year before.

Areas with the largest decreases — all down by two points — were quality and freshness of meat and produce (81), website satisfaction (80), merchandise availability (79) and call center satisfaction (78). Supermarkets also scored low in frequency of sales and promotions (78), quality of pharmacy services (76) and speed of checkout process (75). New criteria this year were grocery mobile apps, which scored well for quality and reliability at 82.

Declined satisfaction for supermarket websites could be “problematic” as the popularity of online grocery services rises, according to ACSI. “Website satisfaction varies among supermarkets, and those that don’t perform well will have difficulty competing,” the report said.

“Except for the convenience of store location and hours (85), all elements of the grocery shopping experience are worse compared to a year ago. Brand names are less available (81), as is merchandise selection (80). Inventory stocks are down as well (79). The quality of meat and produce has lessened (81) and shoppers say stores aren’t as clean and well laid out as they used to be (81). Sales are less frequent (78), and pharmacy service is worse (76),” ACSI noted.

“Supermarket customer service is showing the same strains as other retail categories. Service personnel are less helpful and courteous in person (81) and over the phone (78). The checkout process is slower and rates lowest at 75,” said the study.

The top finishers in other retail categories were Costco (83) and Sam’s Club (80) for department and discount stores, Kroger (81) and Albertsons (78) for health and personal care stores, L Brands (82) and Barnes & Noble (81) for specialty stores, and Costco (83) and Amazon (82) for Internet retailers.

“There is a slump in customer satisfaction in every category of the retail sector,” according to David VanAmburg, managing director at ACSI. “Internet retail versus brick-and-mortar retail, department stores versus specialty stores, it’s all down. Considering the importance of retail to overall consumer spending, this decline is a big deal.”

ACSI cited “underwhelming customer service” as one factor pulling down retail customer satisfaction. Service has been squeezed, in part, by the nation’s low unemployment rate, which has fueled employee turnover and pushed retailers to find and train new employees and grapple with staff shortages, the report said.

“Historically, the ACSI has found that the more service typically required for a given industry, the lower the customer satisfaction, and it rings true for retailers this year,” VanAmburg reported. “Things like courtesy and helpfulness of store staff, call center support, and even availability of merchandise on the shelves all have a service element and have seen drops from a year ago.”