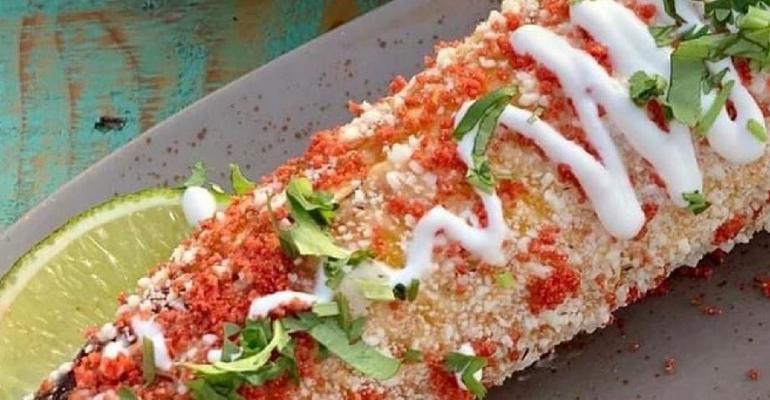 Last year was a barnburner for supermarkets. Their double-digit sales growth came at the expense of shuttered restaurants, as consumers emptied the shelves and filled their carts with all manner of consumables to ride out the pandemic. The momentum carried well into this year, as Nielsen reported that as of late May, grocery purchases were still a hefty 16% above the same period in 2019.

The drastic shift to at-home preparation and consumption that left operators reeling may also have contributed to a menu R&D reset. Because, while restaurants traditionally have served as a major source of inspiration for retail packaged-goods developers, the recent past has seen chefs combing the grocery aisles for ideas.

Savory switch ups. In June of last year, Bloomberg reported a 70% increase in sales of affordable, shelf-stable canned meats, particularly Spam: the venerable Depression-era brand. Rutter’s, a 78-unit convenience store chain headquartered in York, Penn., took advantage of its renewed popularity and went hog-wild with a recent Spam promotion that ran through July and included a burger and bowl, four sandwiches and mac and cheese.

Breakfast cereal has also been a wellspring of culinary creativity, as with the Cinnamon Toast Crunch Shrimp at 16-unit, South Carolina-based Shuckin’ Shack Oyster Bar. Offered as a secret off-menu item at the chain’s Wilmington location this spring, the item was served with a side of sweet Thai chile sauce.

Related: Restaurants are thrust into the vaccine ‘debate’

Crunchability looms large in other items that borrow from the grocery store. Taco Bell staked a claim early when it introduced Doritos Tacos Locos Tacos. Launched in March 2012 in what was the chain’s largest product introduction to date, Doritos Locos have remained among the top sellers. Stepping it up a bit, Woodfired Cantina + Lounge in St. Paul, Minn. finishes Takis Elotes, its version of the Mexican corn-on-the-cob classic, with crushed Takis: fiery hot tortilla chips popular in Mexico.

Special props in the supermarket sweep go to Lazy Dog Restaurant & Bar, the casual dining chain that has garnered mountains of attention for its TV dinner line. Introduced for takeout and delivery last summer, the frozen items nod to the 1950s classics with a retro serving tray and equally retro varieties like the new Salisbury steak, which is topped with house-made mushroom-and-onion gravy and served with garlic-butter corn and peas and carrots. The dessert compartment contains a peanut butter cup brownie.

Sweet switch ups. In August 2020, CNN reported that “Kraft Wants You to Wake and Smell the Mac and Cheese.” The story noted that 56% of parents were serving the kid-favored dinner standard for breakfast, which made sense given that many parents had been cooped up for months with their picky progeny. It turns out that this was just the opening act for this summer’s outside-the-blue-box launch of ice cream made with cheesy mac. A collaboration between Kraft and New York City-based Van Leeuwen Ice Cream, the flavor won rave reviews for its dreamy, creamy flavor — the iconic, day-glow orange color notwithstanding. 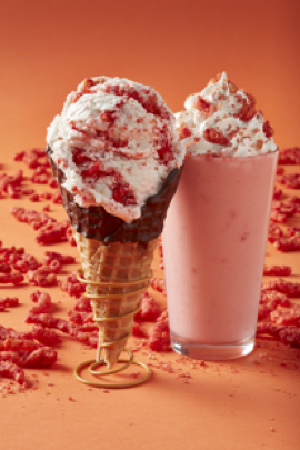 Food on fire. Arguably the biggest — and probably the hottest — crossover hit from supermarket shelves to restaurant menus has been the widespread appearance of Flamin’ Hot Cheetos, the snack favorite that has been adding unexpected color and zing to a range of sweet items. Marble Slab Creamery turned up the heat with the limited time Flamin’ Hot Ice Cream -- and for patrons who’d rather sip their heat through a straw, there is a Flamin’ Hot Shake as well.