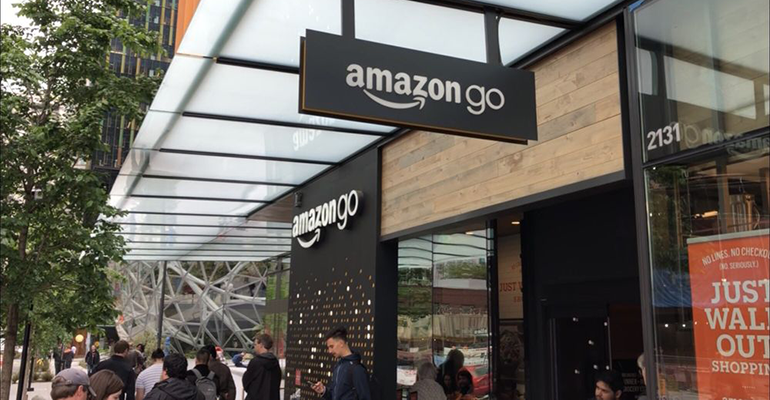 Amazon.com Inc. has opened its second Amazon Go convenience store, with two more on the way.

The company confirmed that it opened a 1,450-square-foot Amazon Go store yesterday in downtown Seattle at 920 5th Ave. The new location is a corner store like its slightly larger predecessor, an 1,800-square-foot unit at 7131 7th Ave. in Seattle that opened in January.

Amazon declined to provide additional details about the new Amazon Go. According to published reports, the second Seattle store has largely the same cashierless, food and beverage-focused shopping experience as the first location but with a narrower selection.

For example, the 5th Avenue store has a more limited grocery assortment — excluding staples like bread and milk — and sells beer and wine but not liquor. Food offerings include convenience-store mainstays like snacks and drinks along with ready-to-eat, to-go breakfast, lunch, dinner and snack options. Fresh prepared foods, however, are supplied via an off-site Amazon facility rather than an in-store kitchen.

Shoppers use the Amazon Go mobile app to enter the store, and Amazon’s “Just Walk Out” technology enables a checkout-free shopping experience. Overhead cameras, weight sensors and deep learning technology detect merchandise that shoppers take from or return to shelves and keep track of the items selected in a virtual cart. When customers leave the store, the Just Walk Out technology automatically debits their Amazon account for the items they take and then sends a receipt to the app.

In mid-May, Seattle-based Amazon confirmed plans to open Amazon Go stores in Chicago and San Francisco but didn’t provide a timetable or details about the locations.

The expansion of Amazon Go, along with the acquisition of Whole Foods Market a year ago, signal Amazon’s efforts to ramp up its brick-and-mortar presence in the retail food arena.

On Tuesday, Amazon marked the acquisition’s anniversary by listing the benefits since completing the merger and integrating its Prime membership program into Whole Foods stores. Those include an additional 10% off sale items throughout the store plus weekly deep discounts on select products for Prime members; two-hour delivery on Whole Foods groceries through Prime Now (currently in more than 20 cities; and grocery pickup in as soon as 30 minutes at select Whole Foods locations.

Amazon Lockers in Whole Foods stores also enable customers to have products shipped from Amazon.com to their local store for pickup, and they can send returns back to Amazon during a trip to the store. Prime members, too, can use Alexa to add Whole Foods groceries to their Prime Now cart. Convenient

“Making Whole Foods Market’s natural and organic foods more affordable and accessible without compromising the industry-leading quality that shoppers trust has been a top goal since the beginning,” Jeff Wilke, CEO of worldwide consumer at Amazon, said in a statement. “In just one year, we’ve made significant progress bringing the combined value of Whole Foods Market and Amazon together.”