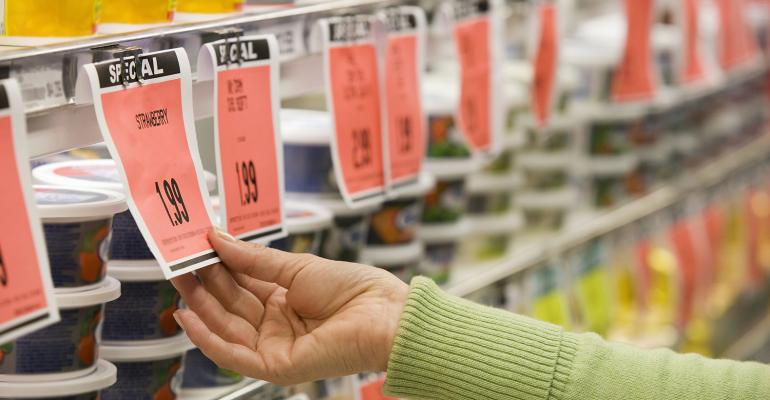 FangXiaNuo / iStock / Getty Images Plus
The CPI for August showed prices for food away from home, or restaurants, rose by 8% year-over-year in August, up from July’s 7.6%, the consumer price index report noted Tuesday, adding that he food-at-home index saw its largest increase since the period ending March 1979.
News>Grocery & C-Store

The price gap between restaurants and retail groceries remained at 5.5 percentage points in August, tying the July chasm, which was the largest in favor of restaurants in 40 years, according to the August consumer price index.

U.S. overall inflation rose 0.1% in August, posting an 8.3% annual rate, according to the Bureau of Labor Statistics report.

The CPI for August showed prices for food away from home, or restaurants, rose by 8% year-over-year in August, up from July’s 7.6%, the consumer price index report noted Tuesday, adding that he food-at-home index saw its largest increase since the period ending March 1979.

“This 8% number compares with prices for food-at-home (groceries and supermarkets) that increased by +13.5% year-over-year in August (sequentially up by +40 basis points from July’s +13.1%),” said analyst Mark Kalinowski, president and CEO of New Jersey-based Kalinowski Equity Research LLC, in a note Tuesday, adding that the food-at-home increase of 13.5% was “easily a 40-plus year high.”

That gap is allowing restaurants to continue to take price increases, Kalinowski noted.

“This dynamic remains a key reason that restaurants continue to take more price than they have in years and years,” he said.

“Although some signs of softness with regard to restaurant spending by lower-income consumers have appeared, in general the restaurant industry’s sales remain healthy,” Kalinowski said. “In fact, following what appears to have been a solid July, we believe that August same-store sales for most (if not all) major segments of the U.S. chain restaurant industry have sequentially accelerated.”

August increases in shelter food, and medical care indexes were the largest of many contributors to the broad-based monthly inflation increase, the bureau said. These increases were offset by a 10.6% decline in the gasoline index.

Inflation continued to be a challenge in the supply chain, Kalinowski said.

“Menu pricing seems poised to remain elevated well above historical averages for the next several months,” he said. “With grocery prices continuing to rise at a faster rate than restaurant prices, and with commodity-cost inflation remaining a huge challenge — coupled with what has been so far fairly manageable consumer resistance to menu price increases — we expect that U.S. restaurants will continue to raise menu prices at a meaningfully higher-than-historical-average rate over the remainder of 2022.”

The Census Bureau, in its July 2022 monthly report, said restaurant sales remained flat and only increased by 0.1% from the previous month.

“Due to rising food prices, consumers are weighing the price of groceries versus restaurants and are finding they might be comparable,” Kalinowski said. “Consumers are more open to eating out and trading down from casual dining to QSR.”

Chip West, retail and consumer behavior expert at Vericast, a marketing company that works with companies like Papa Johns International Inc., said in a statement after the July Census Bureau report, that quick-service restaurants were seeing business from new customers, “which shows the importance of expanding messaging to consumer segments that aren’t the typical target audience.”

West added, “In order to stay competitive, casual-dining restaurants need to expand messaging to different consumer segments and promote value, such as offering a discount on an entrée, to retain and attract customers.”

The Census Bureau’s August report is due out on Thursday.