NRN breaks down what restaurant operators can expect in each state

As the debate about what constitutes a “living wage” continues among lawmakers across the country, restaurant operators will see minimum wage increases in 21 states, starting Jan. 1, 2015.

Some increases are the result of legislation enacted in 2014, and others are increases pegged to the Consumer Price Index or inflation.

As of Jan. 1, 29 states and the District of Columbia will have a minimum wage set higher than the federal rate of $7.25 per hour, according to the National Council of State Legislatures.

Other places, including Alaska, Delaware, Minnesota and Washington, D.C. have increases scheduled for later in 2015, not on Jan. 1.

And, for many, the wage hike planned for next year is a phased-in increase that will continue climbing in 2016 or later. The wage in Massachusetts, for example, will climb to $11 by Jan. 1, 2017. The District of Columbia will hit $11.50 by July 2016; and California, Connecticut, Hawaii, Maryland, and Vermont are on deck to reach or surpass a $10 per hour rate by 2018.

Several cities will also see the local minimum wage increase in the new year, including San Francisco, Seattle, San Jose and Chicago — all above $10 per hour — with the highest wage of $15.24 per hour going to workers at the Seattle-Tacoma Airport.

Here’s a look at minimum wage increase for 2015 and beyond: 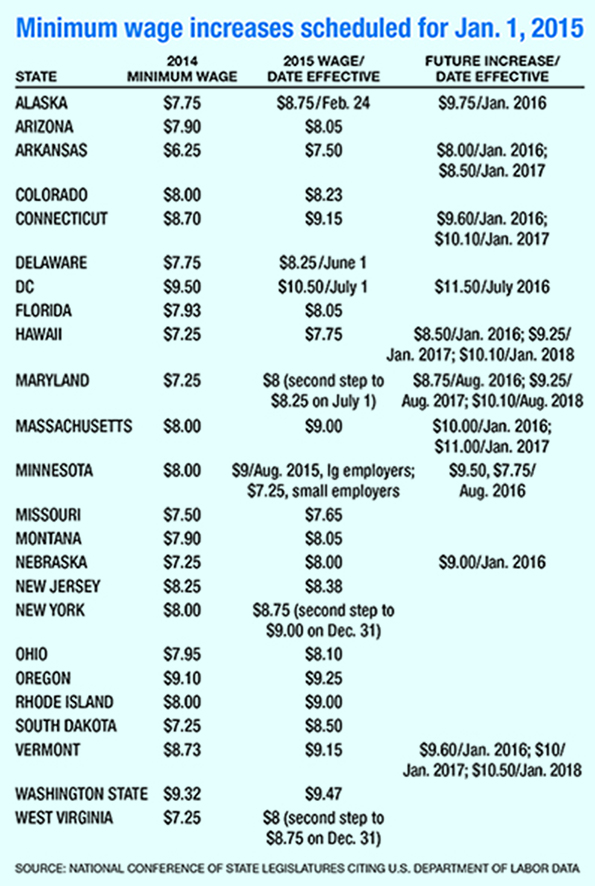