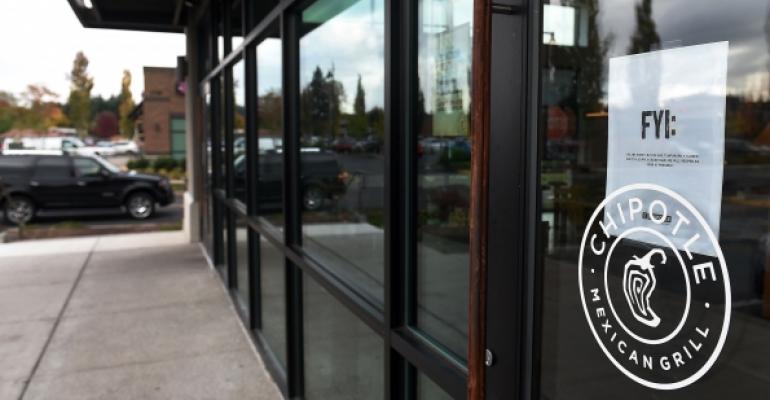 <p>Chipotle has temporarily shuttered restaurants in Washington and Oregon after an E. coli outbreak.</p>
News>Fast Casual

The Pacific Northwest restaurants have been sanitized, food replaced

Chipotle Mexican Grill Inc. said Tuesday that the 43 restaurants in the Pacific Northwest that were closed after an E. coli outbreak will reopen in the coming days, sanitized and restocked with new ingredients.

The outbreak in Washington and Oregon sickened 42 people as of Monday, and health officials said 11 restaurants have been implicated. Chipotle said it voluntarily closed all 43 units throughout the region on Oct. 31 in an overabundance of caution.

Health officials have yet to identify the specific cause of the outbreak. In Oregon, where six Chipotle restaurants have been implicated in the Portland area, health officials said almost 25 food samples have been tested and no E. coli was found, though more tests are still pending.

In Washington, five Chipotle restaurants are believed to be associated with the outbreak, including two in Seattle, and units in Vancouver, Kent and Burlington.

Health officials there said they have looked for lapses in food safety, contaminated food items, sick workers and other potential sources, as well as tracing ingredients back through the supply chain.

So far, no specific food, beverage or flaw in food safety has been identified, officials said, though more test results are expected next week.

In Washington, health officials warned that food testing may not show conclusive results. Typically, contaminated food is in a single batch that was consumed, or potentially contaminated surfaces get sanitized prior to being swabbed.

The Centers for Disease Control and Prevention have identified one person in Minnesota who had recently traveled to Portland who was infected with an E. coli strain with a similar DNA fingerprint. That person, however, did not eat at Chipotle, Washington health officials said.

Meanwhile, Chipotle and health officials say there is no ongoing risk.

Officials with the Denver-based chain said all domestic restaurants throughout the 1,900-unit system have been deep-cleaned and sanitized.

In the 43 restaurants that were closed, all ingredients have been replaced. All fresh produce, raw meat and dairy items, including cheese and sour cream, have been tested prior to restocking.

The company said it has beefed up testing of produce and fresh meat at all units nationwide to go above and beyond what’s required, and implemented additional food safety procedures and audits. Two food safety consultants have been hired to assess and improve standards.

Chipotle said it has conducted 900 of its own tests to date and none show E. coli.

No Chipotle employees were sickened in the outbreak, the company noted.

The most recent reported date that a meal possibly linked to the outbreak was served was Oct. 24. The incubation period for E. coli is typically three to four days after exposure, but may be as short as one day or as long as 10 days, Chipotle said, citing the CDC.

“The safety of our customers and integrity of our food supply has always been our highest priority,” Steve Ells, Chipotle chairman and co-CEO, said in a statement. “If there are any opportunities for us to do better in any facet of our sourcing or food handling — from the farms to our restaurants — we will find them.

“We are sorry to those affected by this situation, and it is our greatest priority to ensure that we go above and beyond to make certain that we find any opportunity to do better in any area of food safety,” he added.