Browse by subcategory
Recent
Recent
Next round of states poised to open for dine-in restaurant service with capacity limits, social distancing requirements and mask mandates
May 21, 2020
Starbucks has regained 60%-65% of its pre-COVID-19 U.S. sales, says CEO Kevin Johnson
May 21, 2020
Taco Bell wants to hire 30,000 more employees
May 21, 2020
How Kevin Lillis adapted when the coronavirus forced Jaxon restaurant in Dallas to close right after it opened
May 21, 2020
How to Get the Most Out of Your Delivery Solutions
May 20, 2020
Featured
Lawmakers debate improvements to federal Paycheck Protection Program loans
May 22, 2020
CDC updates guidelines for reopening restaurant dining rooms and bars
May 21, 2020
Trending this week: McDonald's reveals its new dine-in safety procedures and more on the CDC’s guidelines for reopening restaurant dining rooms and bars
May 21, 2020
Restaurant executives press Paycheck Protection Program term extension with Trump
May 19, 2020 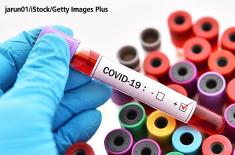 Coronavirus Updates
The latest updates on coronavirus and COVID-19 for restaurants, operators and the food service industry.

Krystal to be bought out of bankruptcy by Fortress Investment Group for $27 million
May 14, 2020
New York-based firm to assume $21.5 million in debt while taking over corporate restaurants

House Democrats propose next coronavirus relief bill, seeking $3 trillion for states and local governments to provide another round of stimulus
May 13, 2020
Republicans indicate they will fight for business liability protections in next round of legislation

Sustainable Restaurant Holdings files bankruptcy, seeks sale
May 12, 2020
The parent of Bamboo Sushi and QuickFish said the company could not survive the coronavirus-related shutdown

Luckin Coffee fires CEO, COO amid fraud allegations
May 12, 2020
The executives were ousted following an investigation of an anonymous report with evidence that Luckin Coffee — Starbucks’ primary competitor in China — had fabricated financial numbers

Report: Uber wants to buy Grubhub
May 12, 2020
Grubhub says 'consolidation' could make sense for the industry; an Uber Eats-Grubhub merger would make Uber's on-demand meal delivery division the No. 1 player, according to March sales data