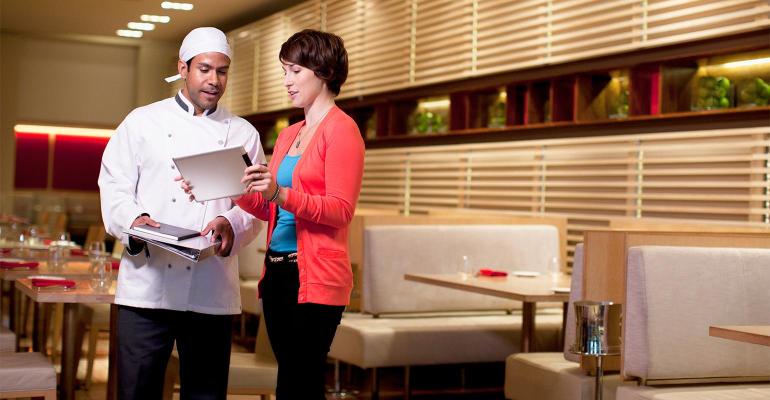 RFDC recap: Inflation, labor shortages, a lot of patience and some optimism

A few overarching themes emerged from the Restaurant Development and Finance Conference, which wrapped up Wednesday at the Wynn Hotel in Las Vegas. None of them should be a surprise to anyone in the restaurant space.

That said, there is optimism that things will get better. When, however, is the million-dollar question.

“The answer is we don’t know. We’re confused. How much supply and demand there is right now is unlike any other data series we’ve had in the U.S.,” Austan Goolsbee, former chief economist with the Obama administration, said during an opening keynote at the conference.

Goolsbee warned of a possible recession, noting that there are 14 recessions on record, most of which have occurred as the result of the Federal Reserve raising interest rates higher than the economy can handle, industry bubbles popping (as seems to be the case now with cryptocurrency), and high oil prices.

“Those three things are happening now. The lights are flashing,” he said.

Inflation is the catalyst behind much of this risk as the supply/demand balance remains out of sorts from a confluence of factors such as the Covid-19 pandemic and the Russian invasion of Ukraine. Many operators are itching to grow but are simply unable to do so at their desired pace because of remarkably higher costs.

Nick Cole, managing director of MUFG Restaurant Finance, said one of his restaurant customers is getting bids to build a new restaurant at $2.5 million, when it normally costs $1.25 million. That operator is waiting for costs to come down, which Cole expects to happen eventually.

“Our restaurant customers want to start growing, but it’s at a point where many can’t build at the prices now so they’re just waiting until the economy comes back in line,” Cole said. “Next year will look better than this year as long as we don’t have another commodities shock. If we can get expenses under control without totally killing consumer demand, it will be a much easier environment to work through.”

Development cost is just one current issue, however. There’s are also delays and supply chain shortages. Kris McDonald, vice president of development at Checkers & Rally’s, said her company is waiting for things like roofs and signs before opening some new restaurants, for instance.

“Some of these things are taking months, but we do expect it to get better,” she said.

Of course, food costs have also been a major nuisance and are up more than 10% across the board, with some items – like eggs, beef and chicken – up by double digits. Predictably, food inflation was a recurring theme at the conference.

“We’re used to normal economic cycles, but this is not a normal pattern because there are so many other things happening. I’ve never seen this kind of commodity cost in such a short period of time. We’re all trying to figure out the playbook,” Cole said.

He expects the pace of growth to stay relatively tempered until next year when some of these pressures are expected to ease.

“Expansion plans have slowed because the reality is it’s hard to manage restaurants right now. Operators are just battling the middle of the PnL (profit and loss statements), not trying to grow their way out of it,” Cole said.

Operators do seem willing to be patient because consumers have shown clear demand for restaurants and restaurants have proven they have pricing power.

“We see businesses that aren’t performing to plan, but they’re taking pricing and making progress. It requires some time before these things realign and they will,” Cole said.

There are also persistent labor challenges to contend with as the industry remains about 500,000 employees short of pre-pandemic numbers. Labor pressures were much more pronounced during last year’s RFDC, according to Cole, and slowed things down in the beginning of 2022. But now they’re taking a back seat to the more pressing issue of inflation.

“If labor were the only issue, the amount of price restaurants have taken would more than offset the costs of labor. So even if labor costs stay high, operators have gotten the check average up to a place that if demand holds up, they’ll be back to a level of profitability when normalization of commodity costs start to flow through the PnL,” he said.

Goolsbee added that this is the tightest labor market he’s ever seen, and it’s driven in part by a “dramatic shift away from service to goods spending” during the pandemic.

“That likely eases a bit now as consumers shift back to service spending,” he said.

Still, challenges remain. For starters, the projected labor force growth is lower than expected. Some of that may be because long Covid has taken an estimated 500,000 to 1 million people out of the labor force, he said. Some estimates are even higher, with Brookings Metro estimating that long Covid has potentially taken 2 to 4 million out of the workforce.

Further, more workers have chosen gig work or entrepreneurship simply because they want more flexibility. And, immigration has also slowed, which has significantly impacted the restaurant industry. Foreign-born workers make up more than 20% of the restaurant labor force.

Even if that is the case, he expects the restaurant industry, and the economy as a whole, to be just fine. He points to the Dow Jones Industrial Average as a proof point. The Dow averaged around 50 in 1900 and surpassed 33,000 in 2022, despite world wars, pandemics, recessions and “every other thing that’s going to go wrong.”

“The American economy is amazingly resilient,” he said, citing “the innovative capacity of the American people.”

“The economy is built to take new ideas and put them in business and make money,” he said. “My message is this: It could be a long worse.”