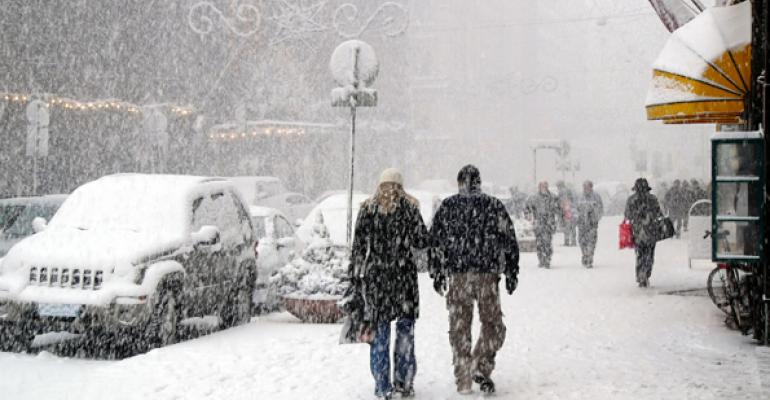 The past winter stopped cold most of the recovery in consumer spending and the housing market from the end of 2013, making 2014 another slow-growth year, experts told restaurant executives at Technomic’s “Restaurants 2014 Trends & Directions” conference.

Lagging wage growth and housing activity do not necessarily portend a bad year for restaurant chains, as long as those brands move quickly to recognize their potential growth markets in areas where hiring, housing and spending have recovered faster from the effects of winter or post-recession upheaval, said keynote speaker Dr. Arjun Chakravarti, associate professor at Chicago’s IIT Stuart School of Business.

“You can’t solve all those problems on your own, but you can react to them, and I think the one opening you have is in the space of analytics,” Chakravarti said. “You have to take advantage of regional variations and of the fact that you can look at the world on a micro level for your industry and respond tactically in a way you haven’t before.”

Chakravarti said he expects an overall economic recovery as the weather warms up and consumers shake off their cabin fever, which would be a good sign for discretionary spending in retail segments like restaurants.

However, Chakravarti said, robust growth in the economy likely would not happen until consumer-driven — not investor-driven — housing sales start to pick up, which he did not expect to happen until 2015 at least.

Some states still have far more exposure to trends causing long-term unemployment and underemployment, like California, Illinois, Michigan and Georgia, he shared. Other regions, like the Upper Midwest and Texas, which are enjoying booming energy sectors, have recovered from the jobs lost during the recession and are growing faster than the rest of the United States.

“When you’re looking at strategies for the industry, you’re really going to have to start to regionalize,” Chakravarti said. “You can start with this national-level heuristic that wage levels are relatively flat, with the exception of … people living in high-income locales. … We’re seeing pretty good job growth, which is great, but the question will be, at what rate are those jobs replacing what people had before?”

At the macro level, the U.S. economy is a mixed picture, Chakravarti said. First-quarter gross domestic product grew only 0.1 percent, and the winter weather likely provided more than 2.5 percent drag on the result, Chakravarti said. Job growth has started to pick up, consistently adding jobs nationwide above the 200,000-person level most months, but wage growth remains flat for all but the top group of earners.

Core inflation remains below 2 percent, helping people purchase durable goods like cars with low interest rates, he said, yet the costs for services like education and childcare are skyrocketing far faster than wage growth.

In December of 2013, “home sales were crawling back,” Chakravarti said, though he noted caveats. That includes the fact that much of the home purchases came not from first-time buyers who finally had more money to spend, but rather from investors looking to convert distressed houses into rental properties or from rich households upgrading to bigger homes. All that housing activity dropped off dramatically during the past winter, he added.

“We have to have a handle on [whether] the growth we saw last year real, and was the massive decline we saw in the winter just a one-off, or are there more structural issues we have to think about?” Chakravarti said.

The big picture for most consumers will still be “ho-hum” in the near term, he added, noting that the housing segment decelerated in the first quarter.

Chakravarti said he and other economists are expecting GDP growth around approximately 2.4 percent, which was revised down from earlier forecasts near 4 percent after this year’s winter derailed much of the economy’s momentum.

“Overall, the economy is absorbing these risks a lot better than it did in the past,” Chakravarti said. “It took a massive winter to slow us down. If that had happened two or three years ago, it would’ve been a quagmire.”