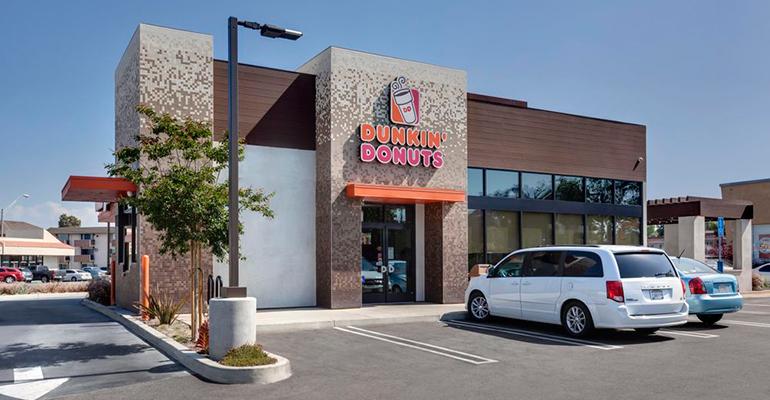 “Our focus is on opportunities that we believe, along with our franchisees’ investments, ignite the transformation of Dunkin’ Donuts into a beverage-led, on-the-go brand,” he said.

An area that may receive a piece of that investment is the company’s digital app, which began testing in designated mobile order pickup areas during the quarter ended Sept. 30.

Brand President of U.S. and Canada David Hoffmann cited “super convenience driven by digital” as a part of the company’s “blueprint” for the future of Dunkin’s brand.

Though beverage-driven and on-the-go may be the theme of Dunkin’s tomorrow, food offerings took center stage this summer.

The comp gains were paired with a 4.4% system-wide-sales growth as the brand moved 1,000 breakfast sandwiches per restaurant per week.

Dunkin’ Brands, including its Baskin-Robbins ice-cream chain, notched net income of $52.2 million, an 0.9% slide from the previous year. Diluted earnings per share were flat at $0.57.

The Dunkin’ Donuts 2 for $2 egg and cheese Wake-up Wrap offer helped the brand boost ticket strength with average receipts for the deal hitting $7, eclipsing the general average ticket of approximately $5.

Total quarterly revenues for Massachusetts-based company — including Baskin-Robbins — increased by $17.1 million to $224.2 million, or 8.2% compared to the prior year.

These positives were offset by muted afternoon traffic for Dunkin’ as 60% of sales were registered before 11 a.m.

“The success our franchisees are seeing in the morning is the direct result of our focus on our core strengths,” said Hoffmann, singling out the brand’s hot and iced coffee as well as its “superior variety” of breakfast sandwiches.

“While we are winning in the morning we are giving some of our success back in the afternoon,” said Hoffmann. “All-day traffic decelerated from Q2 driven by declines in the afternoon day part but morning traffic is in line with Q2.”

While he acknowledged that there is more work to be done, Hoffmann said Dunkin’ has reached a significant milestone.

“Reclaiming the morning day part in a highly competitive environment was our first priority before stretching our focus into other day parts,” he said.

Hoffmann also gave a bullish outlook on the company’s future investment in doughnuts.

“Owning the holidays is just one tactic we are using to capitalize on our position as the number one retailer of doughnuts across the U.S.,” he said, pointing to seasonal-twists on traditional offerings as a useful sales tool.

In September, Hoffmann told NRN that Dunkin’ was dedicated to recapturing its “Doughnut Mojo”

Dunkin’ Donuts opened a net of 137 new locations during the quarter, adding to what is now approximately 12,400 global locations. There are approximately 7,900 Baskin-Robbins locations worldwide as well.