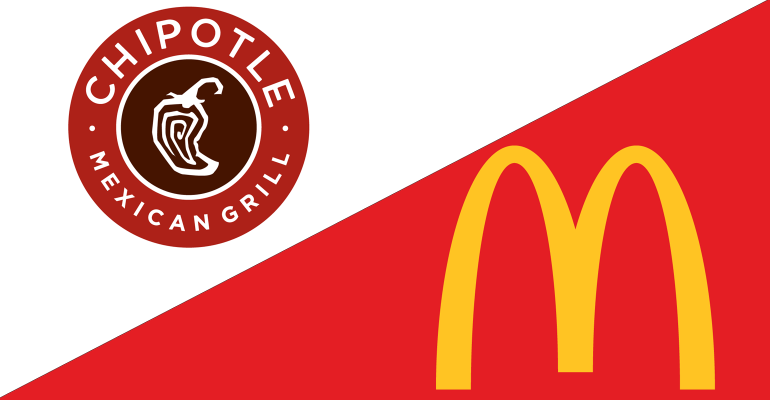 Two years ago, McDonald’s Corp. was the restaurant industry’s past, and Chipotle Mexican Grill Inc. was its future.

Today, however, investors are betting the opposite.

McDonald’s stock hit more than $150 a share for the first time, up 28 percent this year, amid growing confidence in the chain’s comeback. It is one of the best performing stocks on Wall Street and is up 70 percent over those two years.

Chipotle, meanwhile, is down more than 8 percent — all of it thanks to one very bad few days that cost the chain more than $1 billion in market value. It is one of the worst performing restaurant stocks this year, and has lost more than half of its stock price over that two-year period.

Some people even think the company should change its name.

To be sure, Chipotle is still expensive, trading at more than 100 times earnings and costing more than $300 per share.

Yet it’s difficult to overstate just how dramatically these two chains have shifted directions over these past two years.

In 2015, Chipotle was the anti-McDonald’s. It was literally changing the restaurant business, inspiring a new generation of fast-casual restaurants all looking to be the “next Chipotle” or the “Chipotle of” whatever they happened to be selling. Its emergence led the entire industry to look for new ways to make its ingredients fresher, more local and more sustainable.

And its unit volumes were nearing $2.5 million, more than twice its fast-casual burrito competitors and remarkably close to those of McDonald’s, which has more dayparts and a drive-thru. Its stock price was over $750 a share, and many felt it would hit four figures.

McDonald’s, meanwhile, was in the midst of losing 500 million transactions beginning in 2012. Customers began shifting their spending to Burger King and Wendy’s. And the chain was having problems not just in the U.S., but in many top markets around the world. Its Japanese market was facing customer abandonment that was positively Chipotle-like.

Ther burger giant changed CEOs, then started overhauling management and cutting costs. Franchisee relations were at one of their lowest points in company history.

The direction of the two chains changed in the fall of 2015.

Chipotle suffered from a series of foodborne illness outbreaks that led to a 23-percent decline in unit volumes in 2016. Then, last week, customers were reminded of those problems when customers in Virginia got norovirus and rodents fell from ceilings in Dallas.

McDonald’s, meanwhile, started selling all-day breakfast that same fall. The sales from that initiative, along with a few others, gave the chain time to work on longer-term strategies like its kiosk-led Experience of the Future restaurants, delivery and curbside pickup.

Investors have been pouring money into McDonald’s this year, believing those initiatives will work.

Many of us in the media compare McDonald’s and Chipotle for two reasons. First, McDonald’s was for years Chipotle’s primary investor, giving the story something of a mentor-protégé feel. Second, many felt, and still feel, that fast-casual concepts like Chipotle represent restaurants’ future, while McDonald’s represented its past.

The truth is much more nuanced, of course, as investors have discovered over these past two years.

There are risks, for instance, in betting fully against a company like McDonald’s, the world’s biggest chain and its most well known brand name. Such brands are relatively safe bets. Chipotle, with a narrower menu, fewer lines of service and a shorter company track record, was always more of a gamble.