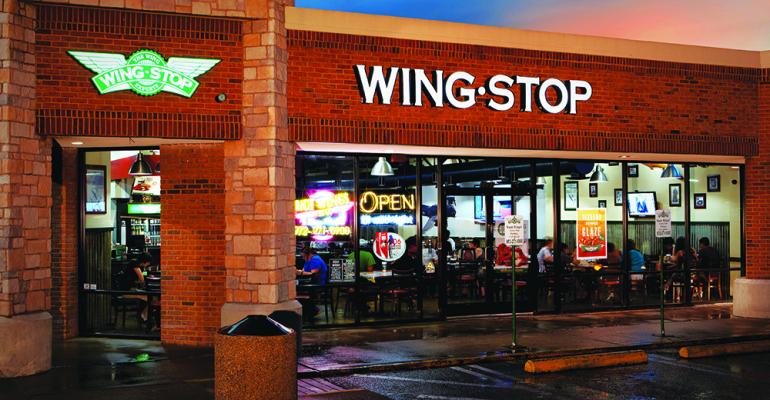 Wingstop Inc., which has stated a goal of eventually digitizing every transaction, took further steps in January with the launch of its customized online ordering and mobile app, executives said Wednesday.

“Guests can now order from a slick user interface that first gauges their need for wings from ‘snacky’ to ‘starving’ with a wing calculator,” said Charlie Morrison, Dallas-based Wingstop’s CEO, in a fourth-quarter earnings call.

“I think you get the sense that we have upped the fun factor and have given a decidedly Wingstop flavor to online ordering,” he said, adding that guest conversion rates have risen 6% and incremental guest check averages have increased 50 cents.

Morrison said digital sales are important to the brand because they carry a $5 higher average ticket than traditional sales and reduce the need for promotional offers.

“We think that we can continue to drive digital sales without employing discounts or incentives like other brands,” he said.

“Digital remains a growth engine for [the] brand,” said analyst Andy Barish of Jefferies in a note Thursday, adding that he suspects a long-term “goal for 100% digital [is] not out of reach.”

The company is also working on improving efficiencies within restaurants and evaluating such options as self-ordering kiosks and order-pickup lockers.

Wingstop continues to expand the number of restaurants that offer delivery as well.

At the end of 2018, 30% of Wingstop’s domestic units offered delivery, and Morrison said he expects delivery to be available at half by mid-2019 and 80% by the end of the year.

“Unlike a lot of other brands who have just rolled out delivery to the entirety of their chain in a week’s notice,” he said, “we are taking a very carefully constructed path.”

The company began testing delivery in Las Vegas in April 2017 and has slowly rolled it out to other markets.

Morrison said Wingstop is well-positioned for delivery because about 75% of its business is already takeout.

Morrison said Wingstop has identified 25 markets for its “fortressing” strategy, a tool used by such brands as Ann Arbor, Mich.-based Domino’s Pizza Inc.

Fortressing targets markets for higher penetration, such as in the Dallas-Fort Worth market, which has 109 restaurants.

“The main objective is to build scale in these markets in order to increase brand awareness at a faster pace and gain market recognition as a go-to restaurant in our guests’ consideration set,” Morrison said.

He added that company sees fortressing as a way to increase brand awareness without cannibalizing existing stores.

Domestic same-store sales rose 6% in the quarter and 6.5% for the year.

Because of a pre-earnings quiet period, Wingstop had been unable to comment Tuesday on a report that Stacy Peterson Androes had resigned as the company’s chief experience officer.

Morrison on Wednesday said that the company would be working on a transition for that position.

“We feel very confident that we are going to be mission-focused and strategically focused on the same initiatives that she’s been leading over her nearly six years of tenure with Wingstop,” Morrison said.

As of Dec. 29, Wingstop had 1,252 restaurants, including 1,124 in the United States and 128 abroad. The company owns and operates 29 of those restaurants and the remainder are franchised. Wingstop added 119 net new restaurants in fiscal 2018.