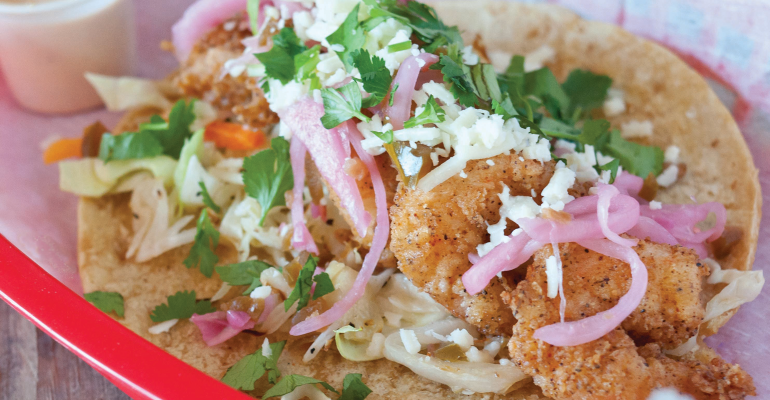 Since being founded a decade ago, the fast-casual chain Torchy’s Tacos has earned quite a reputation for its food, as well as its irreverence — beginning with the chain’s “Damn good tacos” tagline.

For General Atlantic, the reputation was simply too good to ignore. So the New York based private-equity group made a minority investment in the fast-casual taco chain.

“Folks that know it raved about it,” said Shaw Joseph, who leads General Atlantic’s restaurant efforts. Consumer “feedback was absolutely off the charts. Folks raved first and foremost about the food, and about the staff, and interaction with the folks at the unit level,” he said.

“It resonates with the consumer in a way we haven’t seen” in a fast-casual brand, he added.

General Atlantic did not disclose the amount of the investment.

Mike Rypka, a former corporate chef and lover of tacos, founded Torchy’s in 2006.

The chain has since grown since to 46 company-owned locations, mostly in Texas, but also in Denver and in Oklahoma. Two years ago, the company began looking for investors as it sought to take the next step in its growth.

The firm had its pick of investors, but ultimately felt it matched well with General Atlantic.

“We liked what we saw,” said Rypka, who is also vice president of marketing and culinary. “Our values are aligned, our principles the same. We liked the way they thought about our business and their other businesses.”

General Atlantic is hardly a newcomer to the restaurant industry. The private-equity group has made investments in Barteca Holdings and in Joe and the Juice. Yet this is its first foray into the fast casual restaurant sector. The firm is making a bet that the sector will continue to grow.

“We’re looking for very high quality brands, and brands that resonate with consumers, with meaningful white space and growth opportunities,” Joseph said. “We believe that fast casual is entering a period of sustained secular growth.”

“This is a founding team that’s done an unbelievable job building the brand to where it is today,” he added. “The strategy remains the same: Great units, serving damn good tacos.”

As part of the investment, Todd Diener, former president of Chili’s, will join the board at Torchy’s, along with Joseph and Andrew Crawford, managing director and global head of General Atlantic’s retail and consumer sector team.

Rypka believes that the General Atlantic group will help the company make good decisions at it enters new markets and opens new locations.

“General Atlantic is going to be a good sounding board for us, helping us with the things we need to look for as we’re able to expand,” Rypka said. “Things like site selection and new markets, and avoiding some of the pitfalls some companies run into when expanding.”

General Atlantic, meanwhile, gets a stake in an evolved fast-casual chain. Torchy’s has breakfast as well as lunch and dinner. And it serves alcohol at many of its locations, something a small but growing number of concepts are getting into.

While alcohol is not a huge part of the chain’s business, it goes well alongside the company’s tacos, and upgrades the chain’s service, Rypka said.

“It gives us an opportunity to have more of a full service component,” Rypka said. “You can get waited by a bartender, who takes your order, and the food is delivered to you at the bar. Some guests appreciate that. It adds to the ambiance.”

Then there are the tacos. The chain boasts “a taco for every appetite,” and its menu includes tacos such as the Fried Avocado taco, or “The Independent,” which includes Portobello mushroom strips, refried black beans, roasted corn, Escabeche carrots, queso fresco, cilantro and avocado as well as ancho aioli.

Other tacos include “The Democrat,” “The Republican,” the “Dirty Sanchez” and “Mr. Orange.”

“We’re not just, ‘Oh, Shoshito peppers are hot and cool, let’s add a menu item with Shoshito peppers,’” Rypka said. “If I had a flavor somewhere and it struck a cord with me, there’s something about that that gets me excited, then we develop a menu item. We’ve taken that approach not only with the store design and food, but just how and why we do a lot of what we do.”

The company is looking at some new markets, but hasn’t made a decision. “You might see us more in the Eastern sector sooner or later,” Rypka said.