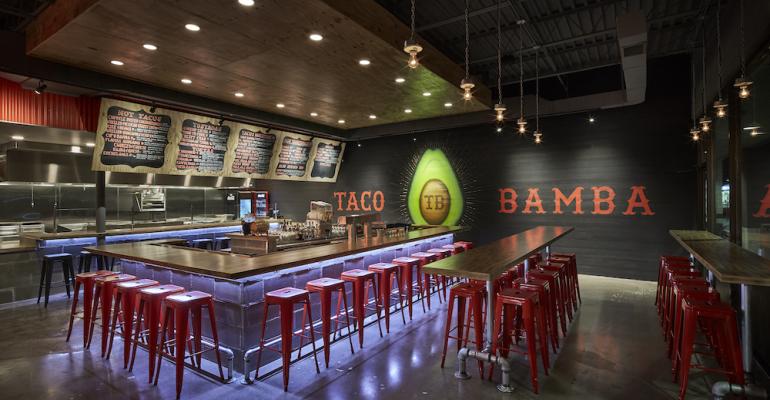 Greg Powers
With six units in Northern Virginia, D.C. and Maryland, the seventh Taco Bamba location is scheduled to open in 2022.
News>Fast Casual

Taco Bamba founder and chef Victor Albisu, who launched what was initially a takeout taqueria in 2013 with his mother and stepfather, Rosa and Bill Susinski, did not disclose terms of the partnership with IMC. The plan is to grow the soon-to-be-seven-unit taco concept first in the D.C. metro area, and then to begin expanding to new markets along the Mid-Atlantic region and East Coast.

Since the first takeout-only unit opened in a Falls Church, Va., strip mall, Taco Bamba added more dine-in and bars, becoming known for menus tailored to specific neighborhoods and a lively, high-energy atmosphere with a counter-service format. The strength of its to-go offerings, however, positioned the brand well to survive the pandemic and the changed consumer.

A James Beard Award nominee, Albisu is also known for his work with the chef network of World Central Kitchen, feeding those in need after disasters and during the pandemic, and the anti-poverty group CARE.

“We weren’t looking for an investment partner, however when we met IMC we knew they were the right partner to help us bring our brand to other markets, “said Albisu, in a statement. “Taco Bamba creates memorable experiences by offering unique menu items and generous portion sizes, and it all centers on people, that’s how we build connections between our staff and our guests. The leadership at IMC has decades of hospitality and brand expansion experience, and more importantly they are a people-first organization. That’s why we think they are the right partner for Taco Bamba.”

IMC was founded in 1971 by James Maynard and Bill Carl, who opened the first Golden Corral and grew the chain, later launching franchising. Now 95% franchised, Golden Corral has more than 300 units.

IMC has brought in other restaurant partners over the years. Taco Bamba seemed like an opportunity for growth not only because of its strong mix of takeout and dine in, but also because of the founders’ people-first focus, said Nate Edgerly, IMC’s chief financial officer.

“What makes it unique is Victor and his stepfather, we felt a kinship and connection to those two,” said Edgerly. “As we got to know the company, it was something different in the sense that we don’t own a taqueria, but it was familiar in the sense that they take care of their people.”

Stuart Frantz, IMC president and CEO, said in a statement, “I have a vivid memory of the first time I walked into a Taco Bamba. The food, music and aroma created an electric atmosphere. There was a palpable energy everywhere from the Taco Bamba team to the guests. It’s no wonder they have such a loyal following.”

When asked if Taco Bamba’s growth would come through franchising, Edgerly said, “It would be quite a ways down the road and if the leadership team there decided that was appropriate. We don’t come in with a playbook.”