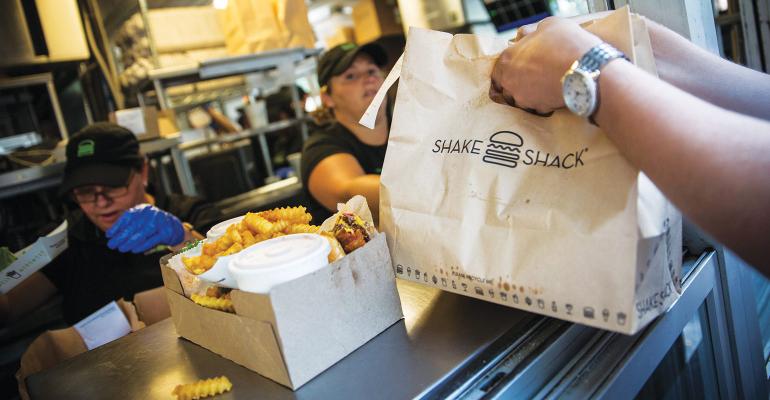 Shake Shack Inc.’s same-store sales slipped in the third quarter, but executives said Thursday that the company’s pace of growth is likely to produce fluctuations in that measure.

“While none of us prefer to see a lower quarterly comp figure, we do believe this is a metric that will continue to show some degree of volatility as long as we're aggressively expanding and growing market share,” said Tara Comonte, Shake Shack’s chief financial officer, said during an earnings call.

“We believe in that overarching market growth strategy that continues to pay out solid top- and bottom-line dividends,” Comonte said.

The company said average weekly sales for company-operated U.S. units decreased to $86,000 for the third quarter of 2018 compared to $91,000 for the same quarter last year. The company said those sales were impacted by adding newer Shake Shack units at a broader range of average unit volumes.

“As noted on many previous calls, AUV will continue to decrease with the addition of newer Shacks with a broader range of sales,” Comonte said.

What’s driving customers to the growing chain is, in part, “menu innovation, which is core to everything we do,” said Randall Garutti, Shake Shack’s CEO.

“We've got a lot happening right now, and we are proud to share, all of it in the nascent or in various stages of testing growth. But what do we know at this point? Well, what we know is, convenience is more important than ever to our guests. The demand to experience Shake Shack in digital channels is significant,” said Garutti.

The company recently announced browser-based ordering from mobile and desktop devices, presumably take away the need for customers to download the company’s smartphone app.

“We know that digital channels continue to grow as a percentage of our total sales, and we know that they generally have a higher average check,” Garutti said. “So, here is the reality: None of this is easy. With the addition of app, delivery, kiosk and now online ordering, we continue to add complexity to our already busy Shacks. These additional channels can, at times, complicate our kitchens and our peak times create certain flow issues in the front desk.”

Digital rollouts like the kiosks could help the brand with labor challenges, he said.

Comonte noted that “labor and related expenses as a percentage of Shack sales increased roughly 90 basis points year over year to 27 percent, driven primarily by minimum-wage increases and the introduction of new lower-volume Shacks to the system.”

Shake Shack has more than 180 locations in the United States and abroad.