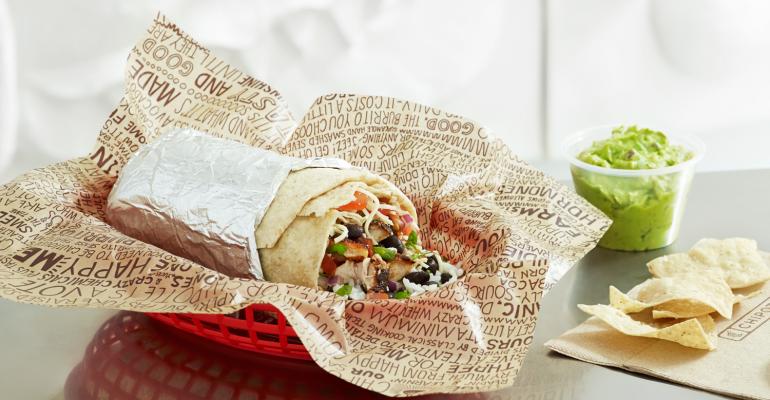 Despite a drop in transactions tied to the coronavirus outbreak, Chipotle Mexican Grill managed to eke out a 3.3% increase in same-store sales in a quarter that saw the chain reach record digital sales of $372 million.

Across the board, the Newport Beach, Calif.-based chain saw gains in loyalty members, delivery orders and mobile order/pickup due to the coronavirus outbreak.

To date, the company has temporarily closed 100 of its more than 2,600 restaurants. The rest of the system remains open for to-go services including carryout with the exception of about 200 to 300 restaurants that are only taking digital orders, CEO Brian Niccol said.

While pivoting to off-premise channels has hurt many restaurant chains, Niccol said the digitally-savvy company was well positioned for the challenge.

In March, the company added Uber Eats as a new delivery partner and stepped up free delivery promotions during the first weeks of the crisis. A survey of delivery customers showed that about 15% had Chipotle delivered for the first time during the last two weeks of March, Niccol said.

When dining rooms are allowed to reopen, Niccol said he’s excited to leverage the spike in new rewards and digital customers.

“I'm very optimistic about what will happen as the phased reopening of the economies goes into effect because I think we're going to hang onto a lot of our gains digitally and a lot of the gains we've made culturally and operationally as we reopen these dining rooms,” Niccol told investors during the company’s first quarter conference call.

Though order volume is lower than normal due to shelter in place orders, the company said April sales are trending well. Jack Hartung, chief financial officer, said stores are in good financial shape as managers are carefully controlling expenses by managing labor and food costs.

Other companies have noted an uptick in transactions in April, as well.

When asked to explain why consumer behavior is changing in recent weeks, Niccol pointed to two factors: at-home cooking fatigue and the arrival of stimulus money.

“I think all the pantry loading behavior has slowed down,” Niccol said, referencing the grocery hoarding that occurred in the first few weeks of the pandemic. “I think there's fatigue in cooking. Combine that with the fact that tax refunds and stimulus money are starting to get in the hands of people.”

Consumers are “breaking the routine of cooking at home” and are now reaching out to restaurants, Niccol concluded.