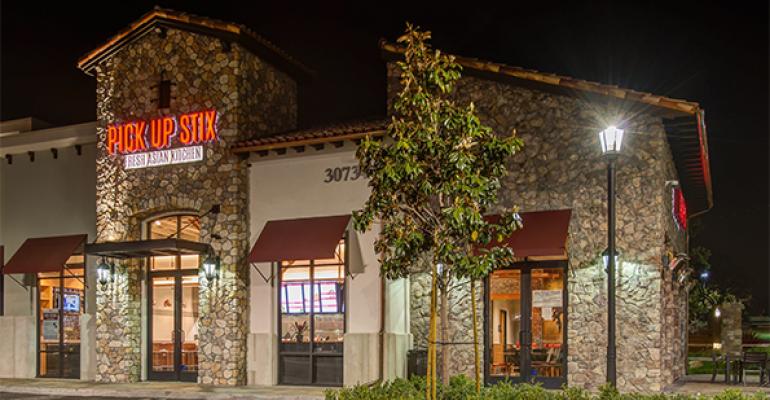 The Laguna Hills, Calif.-based fast-casual chain, with about 75 units in Southern California, generally does about 60 percent of sales as take out in units of around 1,500 square feet, said CEO Lorne Goldberg who acquired the brand in 2010.

The new prototype, which opened in Westlake Village, outside Los Angeles, in March, is larger — between 2,000 square feet to 2,500 square feet — with a design that Goldberg hopes will better convey the brand’s made-to-order food and its positioning in the increasingly competitive fast-casual Asian niche.

“Pick Up Stix has always had amazing food, and our guests know that,” Goldberg said. “But the design element in fast casual is really important today. If you have a nicer, warmer-looking store, you’re going to bring more people in to sit down and enjoy the experience of not only the food but the environment.”

All units have open kitchens, but the new prototype adds a station in which salads are made in front of guests. Goldberg said salad sales at the new unit are eight times higher than at traditional locations.

“Our salad offerings will play a key role in attracting more guest frequency,” Goldberg said. “Our salads are as good, if not better, than other fast-casual concepts who specialize in salads.”

The new unit also has a bar area with sports viewing on television. Beer and wine will be available, pending approval of the liquor license.

At another station, the chain’s signature fortune cookies are dipped in chocolate in front of guests, further accenting the freshness of the menu, Goldberg said. Guests get a free cookie, but bags of cookies are also for sale at the register.

The prototype also aims to be more family friendly, Goldberg said. Some seats have embedded touchscreen iPads for kids to play games.

“Not enough people know how much variety we offer and how healthy they can eat if they so choose,” Goldberg said.

The average systemwide check for Pick Up Stix is $13, but the new prototype is averaging about $14, as guests tend to choose more premium items, Goldberg said.

Although it is too early to gauge, sales are about 40-percent higher at the new prototype, compared with traditional locations in the area, he said.

The goal is to fill in the Southern California market, Goldberg said.

“There are many pockets we’d like to tap into in Southern California,” he said. “I feel there’s more opportunity here before we export the concept.”

Goldberg also owns the 52-unit Leann Chin brand, mostly based in the Midwest, as well as 43-unit Mandarin Express, a food-court concept located primarily in the Southeast.

Goldberg said he expects to open three to four Leann Chin units, as well as four to six Mandarin Express locations, this year.