The May redesign highlights Zoodles dishes, LTOs and top sellers

Noodles & Co., whose initial success was built on the brand’s globally-inspired pasta bowls, is unveiling new menu boards next month that group bowls by top sellers and pasta styles instead of regional flavors.

The overhauled menu boards, which debut May 8 at more than 450 restaurants, will make ordering easier as dishes are arranged more intuitively — based on how customers order. The fresh boards sport bolder red, orange and blue colors and contain individual pricing on dishes for better transparency, the company said.

Currently, menu items, except macaroni and cheese dishes, are grouped in categories based on their global flavor profile: Americas, Asia and Mediterranean. Each bowl also contains a base price for a small or regular size, which is listed separately on the menu. These dishes often cost more when diners add proteins such as meatballs or grilled chicken, said Jonathan Tress, vice president of marketing at Broomfield, Colo.-based Noodles.

In some cases, dishes can have up to four prices, depending on the size and protein choice.

“It was a little confusing for guests,” Tress told Nation’s Restaurant News in an exclusive phone interview to discuss the changes. 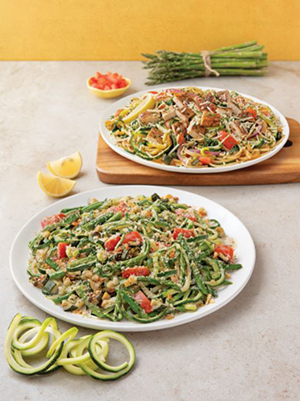 Dishes on the new menu boards will be priced individually. The global categories will be scrapped and replaced with new sections: Classic Noodles, Signature Favorites, Zoodles and other Noodles, Asian Noodles and World Famous Macs.

Tress said removing the company’s trademark emphasis on global pasta flavors is not “a big departure” for the brand. He said it “reinforces our authority around noodles” and allows the chain to be nimbler when it comes to adding new menu items.

He added that “sometimes the [global categories] forced us to figure out where a dish” belonged on the menu board.

In the company’s last earnings call, CEO Dave Boennighausen said it expects “an increase just north of 3% when the menu boards are refreshed.”

The increase, if any, depends on the item. For example, a regular Zucchini Truffle Mac will increase $1.25 from $7 to $8.25. A regular BBQ Pork Mac increases 25 cents to $9.50.  But, the Buffalo Chicken Mac is unchanged at $9.25.  Company spokeswoman Danielle Moore said the large spike in price for the mac ‘n cheese dish with Zoodles was done because the initial “introductory price” of that dish contained no upcharge for the vegetable.

“We are adjusting the price to account for the zucchini,” she said.

Bowls or salads will only change in price if diners add or substitute dishes with other ingredients. Add-on/substitute prices include $1 for zucchini noodles or gluten-friendly shells; $2.75 for grilled chicken, parmesan-crusted chicken, meatballs, tofu or pork; and $3.25 for steak or shrimp.

Beyond being easier to navigate, Tress said the new layout also showcases the company’s rapidly growing better-for-you food choices. The board, for example, corrals vegetable, whole wheat and gluten-friendly choices under one section. New symbols are also being used to point to vegetarian dishes.

In the company’s fourth-quarter earnings call in mid-March, Boennighausen said the company’s “better-for-you platform” has helped bring back lapsed users who left the brand because of the carb-heavy pasta menu.

To boost average checks, the new menu boards have added a “Make it a Meal” section. It also has a dedicated panel for highlighting limited-time dishes.

“We never had the ability to bundle,” Tress said. “That’s completely new for us.”

The bundle option includes a drink and side dish for $3.25, a feature that performed well when Noodles tested the new menu boards in about 40 restaurants.

With the new board launch, Noodles plans to highlight two new “Light and Lovable” dishes that contain the company’s game-changing zucchini noodles. The Zucchetti Garlic & Wine Sauce with Balsamic Chicken contains a base mix of spaghetti and zoodles, which Noodles has coined as “zucchetti.” The other dish is Zucchini & Asparagus with lemon sauce.

The redesigned menus and pricing overhaul were done in collaboration with Westport, Conn.-based King-Casey and Tampa, Fla.-based Revenue Management Solutions.