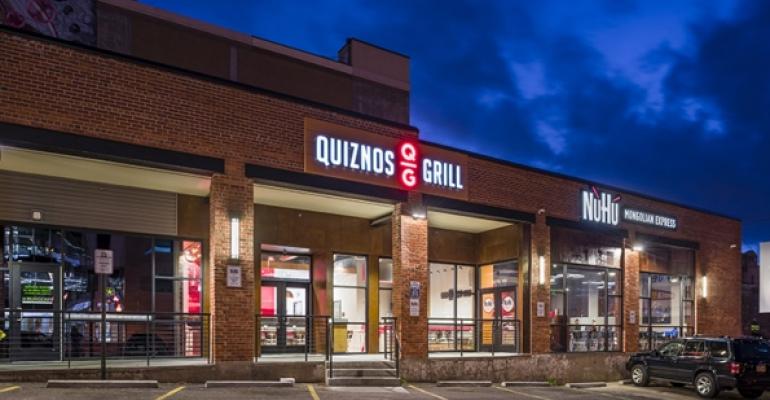 The restaurant, which opened about three blocks from the sandwich chain’s original unit, leverages the equity of the Quiznos brand in a fast-casual setting, Doug Pendergast, Quiznos president and CEO, told Nation’s Restaurant News.

“In many ways it will be a learning lab for us as we think about Quiznos’ turnaround,” Pendergast said. “One of the things we’re most excited about is the opportunity to learn how far we can push and extend the Quiznos brand.”

The Grill features craft beer and wine on tap. Customers order at the counter and food runners deliver to tables. The restaurant kitchen features a grill top and fryer, as opposed to the conveyor ovens used to toast sandwiches at the chain’s core brand.

The menu at Quiznos Grill is small and focused, and prices are higher than the core brand, reflecting the fast-casual positioning.

At the core brand, sandwiches are generally priced from $6 to $8.

Quiznos Grill is designed to be a “more elevated concept” that goes furthest in pushing the envelope for the chain, Pendergast said.

“But, fundamentally, the goal is bottom-line profitability,” he said. “We need to drive sales and guest counts.”

Pendergast described the move as just one part of a multi-pronged plan to turn Quiznos around.

Over the past few years, Quiznos has shrunk dramatically in the U.S. as franchisees struggled to stay afloat. The 1,265-unit chain includes 690 domestic units and 575 international locations. In its heyday, in 2006, Quiznos had more than 5,000 units.

After Quiznos emerged from bankruptcy last year, Pendergast joined the company in January and began setting a new course. One of his first moves was to restructure the distribution and supply system for the mostly franchised brand, which had long been the focus of franchisee complaints.

Now the company has several irons in the fire as it attempts to rework the brand in more consumer-facing ways.

In addition to the Quiznos Grill test, the chain launched last week an all-new menu for the core brand at 20 restaurants within the Denver market, along with a new marketing campaign.

As part of the test, the participating restaurants are experimenting with a more sophisticated TurboChef oven that allows team members to more thoroughly and consistently toast sandwiches, as well as improving speed and efficiency, eliminating the need to preheat some proteins, Pendergast said.

More on the new menu

“One hundred percent of the franchise operators in the test made the decision to invest in the new TurboChef oven, which was very encouraging,” Pendergast said.

The Denver test, which includes five company-owned and 15 franchised units, includes new meats and cheeses and new bread options, along with new pastas, salads and desserts.

“It’s not a burger but it gives the flavor profile of a hamburger,” Pendergast said.

The new menu also upgrades classic Quiznos sandwiches like the best-selling Italian with the addition of provolone cheese, sweet peppers and Italian vinaigrette on ciabatta bread, for example.

The test menu is being supported in Denver with an integrated marketing campaign with the tagline “Live Toasty, Eat Toasty,” including TV ads, radio, digital, and local unit efforts.

The campaign focuses on a “First Bite Guarantee,” giving customers the opportunity to get their money back or replace their order if they don’t love it.

“It’s a way to reduce any barriers to trial and emphasize not just the food but renovating the brand positioning,” Pendergast said.

The Denver test also included a comprehensive clean-up of the 20 restaurants, making sure everything was in good repair and retraining team members to better execute the menu, Pendergast said.

That effort alone resulted in a 23-point increase in customer satisfaction scores, he noted.

The company will evaluate the Denver test into the first quarter of 2016 to determine a possible rollout, Pendergast said.

Meanwhile, across the domestic system over the past few weeks, the company has rolled out a “Simpler and Better” menu overhaul that has boosted portion sizes for proteins and simplified recipes to improve execution.

Where the amount of meat or cheese on a sandwich previously varied by recipe, the new Simpler and Better menu uses the same portion size consistently for meat and cheese. Pendergast said portions are larger than those found at other national sandwich chains.

So far, the response from both franchisees and guests has been positive, and the result has been an uptick in same-store sales in the low single digits, Pendergast said.

Meanwhile, Quiznos Grill will also offer insights into possible changes ahead for the core brand, he added.

“This could very well be a standalone brand that grows domestically or internationally, but all of our franchisees would benefit from insights and learnings that come from really pushing the envelope with Quiznos Grill,” he said. “We want to learn about what kind of benefits we get from the different kitchen engine, with the flat-top grill and fryer, and how we can pull some of those lessons into the Quiznos brand.”