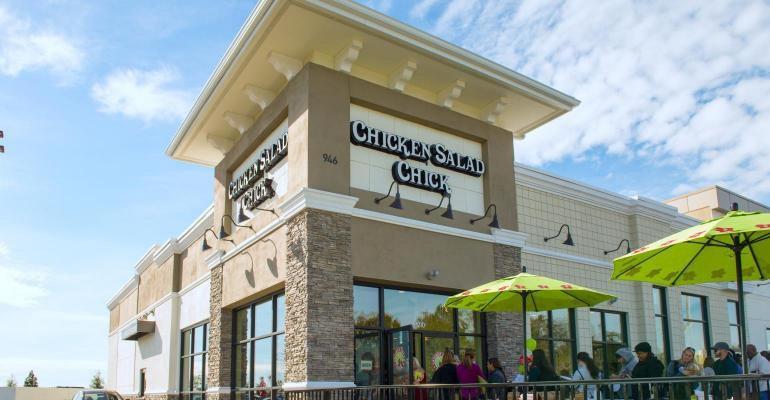 Chicken Salad Chick is on track to open more than 40 locations in 2022 which will help propel it toward achieving its overall development goal to have 500 locations open and operating by the end of 2025.
News>Fast Casual

Nation’s Only Chicken Salad Franchise Continues to Expand Across Texas, Inks Deals for Locations Across Austin, Dallas and San Antonio

Multi-Unit Agreements and Upcoming Openings Fuel the Fast Casual’s Statewide Growth, On Track to Hit Development Goal of 500 Locations by 2025

Chicken Salad Chick, the nation’s only fast casual chicken salad restaurant concept, has announced the signing of franchise agreements that will bring nearly 20 new restaurants to the state over the next five years. The brand has signed two major deals over the past year in Texas— one for 8-units in San Antonio in October 2021 and most recently one for 8-units in Austin. Texas continues to prove itself as a prime area for expansion as Chicken Salad Chick builds on the success of its 21 existing locations across Dallas, Fort Worth and Houston. The brand plans to open five new locations in Texas this year, which add to its goal to open 50 locations across the country by the end of 2022.

Behind the Austin agreement is duo Austin Young and Sara Ingram. Restaurant and franchise veterans, Young and Ingram are the current owners of Chicken Salad Chick – Waco and two of the youngest franchisees on the Chicken Salad Chick roster. The pair also has two restaurants in development in Temple and Killeen. Eager to further expand their multi-unit portfolio, Young and Ingram plan to open the eight units in Austin over the next three years.

"Austin is one of the fastest-growing cities in the country, and we're very excited to introduce the brand to such a booming market,” said Austin Young. “As a young business owner, Chicken Salad Chick has been so welcoming and supportive – with great core values in both operations and customer services on top of its quality menu offerings. This eight-unit deal was a natural next step in our career with the brand because we get to be on the ground floor of a fast-growing, fan-favorite concept.”

San Antonio development is fueled by OberRoc LLC, a franchise company formed by San Antonio natives James Oberg, Jeff Rochelle and George Shaw with the goal of growing innovative restaurant concepts in the Greater San Antonio area. The eight locations will span across San Antonio, including Bexar, Kendall, Comal and Hayes Counties, and development is well underway with the first location slated to open by the end of this year located at 22831 N US Hwy 281, Suite 116 in San Antonio and the second to open by Q2 2023.

Additional development is expected for the Dallas-Fort Worth area with established Chicken Salad Chick franchise groups Hazel 5 Ventures, LLC and Metroplex CSC, LLC. Hazel 5 Ventures, LLC currently owns six locations in the Fort Worth area and plans to add five more locations to Greater Dallas over the next three years. They recently acquired the rights to develop Murphy, Rockwall, and Forney are expecting to open two new locations in Southlake and Weatherford by the beginning of 2023. Metroplex CSC, LLC currently owns three locations in the Dallas area with plans to add 12 more in the next five years and are expected to open a new location in Frisco by the end of 2022.

“As our brand awareness and guest loyalty continue to increase, we are seeing a demand in franchise opportunities throughout the state,” said Scott Deviney, CEO of Chicken Salad Chick. “It is exciting to see Chicken Salad Chick’s southern expansion in action. We’re more than humbled to support our franchisees as they continue to thrive in markets across Texas, and look forward to seeing how communities across the state respond to the product.”

With an open real estate landscape and vast opportunity for market growth, Chicken Salad Chick is looking to further expand across Texas by adding 50-plus locations over the next five years with strategic franchise partners. Target development markets for the state include Abilene, Beaumont, Corpus Christi, Longview, Lubbock, Midland, Odessa, San Angelo, Sherman and Wichita Falls.

Chicken Salad Chick is on track to open more than 40 locations in 2022 which will help propel it toward achieving its overall development goal to have 500 locations open and operating by the end of 2025.

Chicken Salad Chick continues to be recognized as a standout franchise system, being named one of QSR magazine’s Best Franchise Deals for the second consecutive year, as well as being named #3 in Fast Casual’s Top 100 Movers & Shakers in 2021 and #7 in the trade’s Top 40 Smartest-Growing Franchises ranking for 2022, respectively. The brand was also highlighted as one of Entrepreneur magazine’s Top Food Franchises of 2021 and has been listed in Franchise Times’ Top 400 Ranking for 2021.

Chicken Salad Chick serves full-flavored, Southern-style chicken salad made from scratch and served from the heart. With more than a dozen original chicken salad flavors as well as fresh side salads, gourmet soups, signature sandwiches and delicious desserts, Chicken Salad Chick’s robust menu is a perfect fit for any guest. Founded in Auburn, Alabama by Stacy and Kevin Brown, in 2008, Chicken Salad Chick has grown to 200 restaurants in 17 states. Today, under the leadership of Scott Deviney and the Chicken Salad Chick team, the brand is continuing its rapid expansion with both franchise and company locations. Chicken Salad Chick has received numerous accolades including rankings in Franchise Times' Fast & Serious and Fast Casual.com's top Movers and Shakers for the third consecutive year, QSR’s Best Franchise Deals for the second consecutive year and Franchise Business Review’s Top Food Franchises in 2020. See www.chickensaladchick.com for additional information.