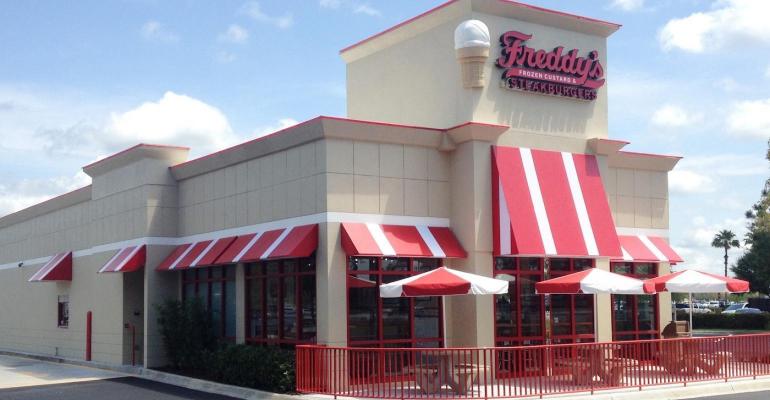 Leading fast-casual restaurant concept Freddy's Frozen Custard & Steakburgers announced today its significant Q1 franchise development success, signing six new multi-unit agreements that will bring a total of 64 new Freddy's locations to new and existing markets, including North Carolina, South Carolina, Texas, Louisiana, Illinois and California. Most notably, existing Freddy's franchisees of more than a decade, M&M Custard, inked an agreement to expand the brand's growing footprint in Chicago with a commitment to develop 13 locations across Lake and McHenry counties. Additionally, Freddy's opened 11 new locations nationwide in Q1 and is on track to open over 50 locations throughout 2022.

"As we celebrate the one-year anniversary of our acquisition by Thompson Street Capital Partners, we're happy to report the Q1 franchise development success we experienced – particularly following such a strong year in 2021. While we've remained true to Freddy's core pillars, under new ownership, we've worked to streamline operations for our entire system, allowing for a higher AUV and enhancements to our business model as a whole," says Andrew Thengvall, Chief Development Officer at Freddy's. "The support of our franchisees has been remarkable through the transition, and we're extremely proud of their desire to continue to invest in Freddy's. The Upper Midwest has been a priority market for us over the past couple of years, and we're thrilled that M&M Custard will further develop our footprint in Chicago."

M&M Custard opened its first Freddy's location in Jefferson City, Missouri, in May 2012, and today the franchise group owns and operates 35 locations across six states. The veteran franchise group has consistently fueled Freddy's franchise development, spearheading the fast-casual restaurant concept's growth in new markets for over a decade. With plans for continued growth throughout the Midwest, M&M Custard identified the Chicagoland area as a thriving market to further grow the Freddy's brand.

"Since making our first investment in Freddy's over 10 years ago, we've fully believed in the concept's growth potential, and we are proud to bring the genuine hospitality and craveable menu items to new markets," said Eric Cole of M&M Custards. "With each new opening, our passion for Freddy's only strengthens alongside the impressive leadership and proven business model that continues to equip us with the tools needed to scale our flourishing business. The Chicagoland area currently has six existing locations, and the strong demand for a greater presence easily drew us to further grow Freddy's footprint there. We're looking forward to spearheading this growth in the Midwest."

In addition to the Chicago deal, the groups that signed new multi-unit agreements in Q1 and their growth plans include:

Additionally, earlier this month, Freddy's also announced the opening of its first airport location in the Will Rogers World Airport in Oklahoma City. Freddy's exceptional commitment to its franchisees and Team Members and its one-of-a-kind Freddy's Guest experience are all factors that help support the brand's greater development goal to double its footprint within the next four years, bringing the total unit count to 800 by 2026.

Franchise opportunities remain in areas across the U.S., including the Northeast, Upper Midwest, California, Florida, Oregon, and Washington and large metro areas such as Pittsburgh and many of its surrounding markets. For more information about development opportunities, contact Mary Coots, Director of Franchise Development, at [email protected] or 316-719-7854, or visit https://freddysfranchising.com.