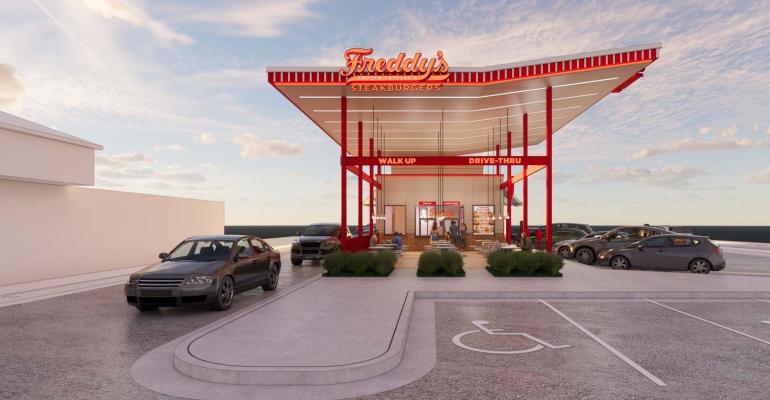 Freddy's Frozen Custard & Steakburgers
Freddy’s has experienced a continuous surge in franchise development, opening more than 20 new restaurants in 2021 year-to-date, including its entrance into New Jersey and Wisconsin for the first time.
News>Fast Casual

Leading fast-casual restaurant concept Freddy's Frozen Custard & Steakburgers announced today that it has named Laura Rueckel as Chief Marketing Officer and Erin Walter as Vice President of Brand Marketing. Bringing decades of marketing and franchise industry experience, these appointments will further fuel Freddy’s accelerated growth strategy as part of the brand’s ongoing efforts to invest in its executive leadership and franchise development teams. Additionally, Freddy’s has also promoted Jill Tinsley, who joined Freddy’s in 2019 as Public Relations Manager, to Director of Communications. Under the leadership of CEO Chris Dull, the brand’s rapidly growing corporate team will continue to focus on accelerating Freddy’s growth across the nation.

"I’m thrilled to welcome Laura and Erin to our fast-growing team at Freddy’s, each of whom brings an unparalleled level of expertise that will elevate the strategic approach behind our marketing efforts. As we celebrate our latest executive appointments, we’re also delighted to recognize the well-deserved promotion of Jill Tinsley, who has been a tremendous asset for the brand over the last several years,” said Chris Dull, CEO of Freddy's Frozen Custard & Steakburgers. "Our franchisees are the foundation of Freddy’s, which is why we’ve continued to prioritize investing in our leadership team and marketing expertise to ensure they have access to best-in-class support.”

Laura Rueckel, a seasoned marketing executive with two decades of experience in brand and franchise marketing, has been named Freddy’s new Chief Marketing Officer. Prior to joining Freddy’s, she held the role of Vice President of Marketing for Edible Brands, where she led marketing for the company’s 1,000 stores across the United States and Canada, specifically overseeing national brand marketing, creative content and media, field marketing, merchandising and public relations. Prior to Edible, Rueckel’s career has been spent in marketing leadership with nationally recognized companies such as The Coca-Cola Company, SUBWAY, Schlotzsky's and The HoneyBaked Ham Company.

Serving as Freddy’s new Vice President of Brand Marketing, Erin Walter brings more than 15 years of experience in the quick-service restaurant franchising industry. Walter comes from Global Franchise Group, LLC, and most recently held the position of Director of Marketing for Round Table Pizza, where she was responsible for executing engaging, interactive marketing to drive awareness, traffic, and overall profitability for the brand.

“It’s an exciting time to be part of Freddy’s, and with these latest additions to our leadership team, we’re positioned to continue accelerating all of the momentum achieved over the past several years and reach new heights," added Dull.

Freddy’s has experienced a continuous surge in franchise development, opening more than 20 new restaurants in 2021 year-to-date, including its entrance into New Jersey and Wisconsin for the first time. The brand is expected to open about 20 more before the end of 2021, with another robust year planned for 2022. Franchise opportunities remain in areas across the U.S., including the Northeast, Upper Midwest, California, Florida, Oregon, and Washington and large metro areas such as Pittsburgh and many of its surrounding markets.

Co-founded in 2002 by Scott Redler and Bill, Randy and Freddy Simon, Freddy’s opened its first location in Wichita, Kansas, offering a unique combination of cooked-to-order Steakburgers seasoned with Freddy’s Famous Steakburger & Fry Seasoning®, Vienna® Beef hot dogs, shoestring fries paired with Freddy’s Famous Fry Sauce® and frozen custard that is freshly churned throughout the day. The brand was acquired by private equity firm Thompson Street Capital Partners in March of 2021. Today, Freddy’s has grown to more than 400 locations that serve 34 states across the nation from California to Pennsylvania, Virginia, down the East Coast states to Florida. For more on Freddy’s, visit the Newsroom and follow us on Facebook, Twitter, and Instagram for the latest news.