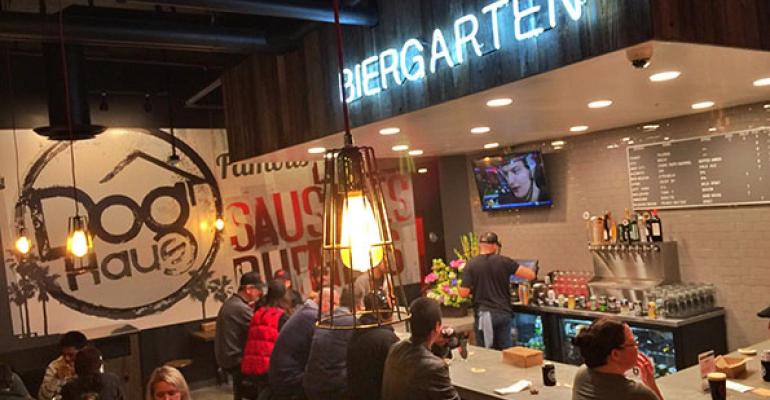 The Dog Haus location will be tethered to the new Luxe Golf development within Ballpark Commons, which will include 57 golf entertainment bays, a second restaurant, and a beer garden.
News>Fast Casual

Dog Haus announced today that it has signed an area development agreement with new franchisee ROC Ventures to introduce the acclaimed gourmet hot dog, sausage, and burger concept to Wisconsin.

Mike Zimmerman, president of ROC Ventures, was already a huge fan of the award-winning brand and menu, and was sold on the idea of becoming a franchisee when he learned about Dog Haus’ ghost kitchen concepts. ROC Ventures plans to open five Dog Haus locations throughout the Milwaukee and Waukesha areas, with the first set to open in the summer of 2022 at the multimillion-dollar Ballpark Commons development, Milwaukee’s newest mixed-use entertainment district.

The Dog Haus location will be tethered to the new Luxe Golf development within Ballpark Commons, which will include 57 golf entertainment bays, a second restaurant, and a beer garden. The Ballpark Commons development encompasses 265 apartments, 145 senior living units, a medical office, an indoor performance center, office and retail space, a baseball stadium, The Rock Sports Complex, and a skiing and tubing hill.

Luxe Golf’s future development plans include a 98-room hotel, a retail building, a brewpub, and a mixed-use apartment building.

“To say that Ballpark Commons is badass is an understatement,” said Dog Haus Director of Franchise Development Erik Hartung. “So, we couldn’t be more excited that ROC Ventures is planning to make Dog Haus’ Wisconsin debut in their phenomenal development. Zimmerman and his crew have extensive knowledge of the area and a proven track record of success in bringing one-of-a-kind concepts, like Dog Haus, to new areas. We look forward to teaming up with them as we bring The Absolute Würst to the Milwaukee and Waukesha areas.”

ROC Ventures manages a collection of brands in the sports, entertainment, and real estate sectors. These include the MASL Champion Milwaukee Wave, The Rock Sports Complex, a Summer College Baseball franchise, the Milwaukee Milkmen professional baseball team, and the mixed-use Ballpark Commons development featuring a new Baseball Stadium and Luxe Golf Bays, among other retail, entertainment, and residential features. ROC stands for “Return on Community,” a goal which informs each and every endeavor undertaken by the organization. For more information, visit rocventures.org.

About Dog Haus
Dog Haus is an award-winning concept known for its gourmet hot dogs, sausages, burgers and one Bad Mutha Clucka. Founded by longtime friends Hagop Giragossian, Quasim Riaz and André Vener, the first Dog Haus opened in Pasadena, California in 2010. 2020 also marked Dog Haus’ 10th anniversary and the brand is poised for aggressive expansion into concert venues and virtual kitchens across the country. Dog Haus was recently honored with Nation’s Restaurant News’ “Menu Trendsetter” award, as part of its prestigious MenuMasters, and continues to garner critical acclaim for its signature all beef dogs and hand-crafted sausages with no added nitrates, 100% Black Angus beef burgers, and a fried chicken sandwich – all of which are made with hormone- and antibiotic-free meat and served on grilled King’s Hawaiian rolls. With the brand’s mission to sustainably feed everyone who walks through their doors, Dog Haus also offers plant-based burger and sausage proteins. In addition to continuing to establish itself as a “haus”-hold name, Dog Haus has helped raise enough funds to provide over one million meals to kids in need through its national charity partner No Kid Hungry. For up-to-date location and brand information, visit doghaus.com or follow Dog Haus on Facebook, Twitter and Instagram @DogHausDogs.