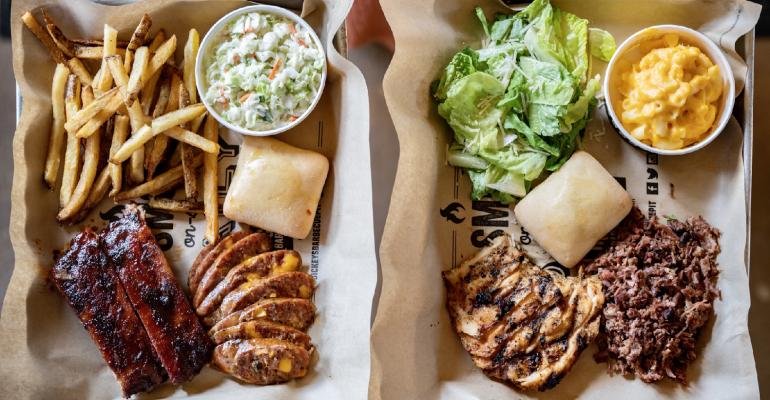 Dickey’s Barbecue Pit is bringing its Legit. Texas. Barbecue.™ to select locations across North America and Canada through a partnership with Ghost Kitchen Brands.

Dickey’s announced today that the Texas-style barbecue brand is teaming up with Toronto-based Ghost Kitchen Brands to serve its iconic meats and southern sides through the satellite pickup and delivery service.

Dickey’s joins a stacked lineup of other brands, such as Cinnabon, Quizno’s, Nathan’s Famous, Shaquille O’Neal’s Big Chicken and more that are now available to order at the first U.S. Ghost Kitchen counter in a Walmart store in New York state. Dickey’s will soon be serving in two U.S. locations in November and over 100 locations in the U.S. and existing locations in Canada.

“Dickey’s Barbecue Pit’s offerings are a delicious addition to our line-up of menu items,” said George Kottas, founder and CEO of Ghost Kitchen Brands. “We’re excited to incorporate Dickey’s smoked meats and wholesome sides into our concepts. Available on their own or mix and matched with our other brands and available in one order out of our Ghost Kitchen.”

Ghost Kitchen freshly prepares well-known comforting food brands in one kitchen and location, optimizing it for online delivery and pickup. The virtual food courts are nearly contactless where the customer can order on the website, QR code, third-party delivery or the kiosk inside the store.

The rapidly growing concept’s expansion plans include opening more locations in Canada with additional U.S. locations including Texas, California, Illinois and Georgia over the coming months and in 2022.

Dickey's Barbecue Restaurants, Inc., the world’s largest barbecue concept, was founded in 1941 by Travis Dickey. For the past 80 years, Dickey’s Barbecue Pit has served millions of guests Legit. Texas. Barbecue.™ At Dickey’s, all our barbecued meats are smoked onsite in a hickory wood burning pit. Dickey’s proudly believes there’s no shortcut to true barbecue and it’s why they never say bbq. The Dallas-based, family-run barbecue franchise offers several slow-smoked meats and wholesome sides with 'No B.S. (Bad Stuff)' included. Dickey’s has over 550 locations across the United States and six other countries and is on track to have over 600 locations by the end of 2021.

In 2016, Dickey’s won first place on Fast Casual’s “Top 100 Movers and Shakers” list, was named a Top 500 Franchise by Entrepreneur in 2018 and was named to Hospitality Technology Industry Heroes in 2021. Led by CEO Laura Rea Dickey, who was named among the country’s 50 most influential women in foodservice in 2020 by Nation’s Restaurant News and. For more information, visit www.dickeys.com.