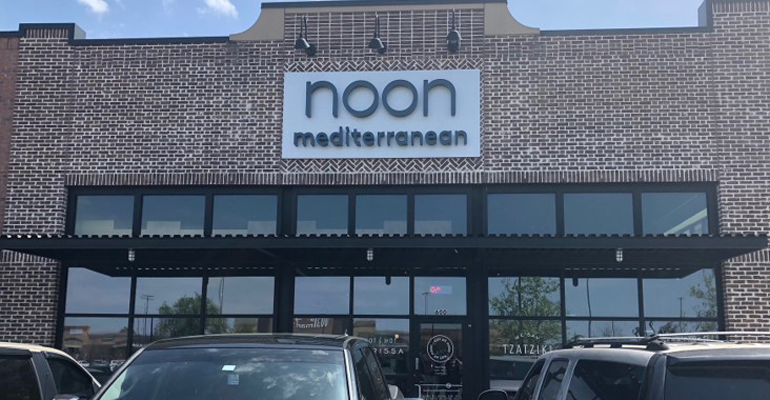 Daphne’s Inc. has acquired Noon Mediterranean out of bankruptcy in a deal expected to be announced later this week.

Within 60 to 90 days, Daphne’s parent Elite Restaurant Group of Los Angeles plans to rebrand New York-based Noon, which has 12 units, under the Daphne’s banner. The 12 units in Texas, Pennsylvania and Massachusetts will become hybrid stores, serving Noon’s build-your-own bowls along with signature dishes from Daphne’s menu.

The deal included more than $731,000 in cash and up to $100,000 in post-bankruptcy costs, in addition to 2-percent equity in Daphne's Inc. going to creditors, along with rent for assumed locations, according to sale offer listed in the bankruptcy filing.

The chain was founded in Austin, Texas, in 2011 as VertsKebap, a döner kebap concept. In 2015, it won $20 million in private funding that fueled a national expansion plan and a name change to Verts Mediterranean Grill, with a broader menu.

The deal will grow Daphne’s to 36 units — 22 existing Daphne’s, 12 converted locations, plus two new units scheduled to open in the next 60 days.

After the close of the deal, Daphne’s will have no debt, and will generate annual revenue of $27 million, according to Noon's bankruptcy filing.

Nakhleh said the Noon stores will maintain their assembly-line format, as opposed to Daphne’s traditional counter service. He said consumers will be able to build-their-own gyros using this format.

“We’re going to see how the hybrid will look,” he said. “It might be the new prototype for Daphne’s.”

Nakhleh said 150 employees in stores and at Noon’s headquarters will remain on the payroll. The only exception: The fate of current CEO Stefan Boyd, who stepped into the role Aug. 1 after former Noon CEO Michael Heyne and co-founder Dominik Stein left the company.

“We haven’t made a determination yet,” Nakhleh said of Boyd.

Boyd said in an email: "We are excited to join the Elite Restaurant Group family. I’m looking forward to working with Mike and his team to ensure a smooth transition as we move toward a successful exit from Ch 11."

When Nakhleh purchased Daphne’s earlier this year, he said he planned to position the 22-unit fast-casual chain for major growth.  He stripped “California Greek” from its name, revamped its look and menu and introduced Daphne’s-branded gyro kits at 90 Costco locations on the West Coast.

He said growth through acquisitions is not over. He said he is looking to buy another Mediterranean brand soon.

Elite began its buying spree two years ago with the purchase of the bacon-centric burger brand Slater’s 50/50 in Southern California. Last month, the company entered into a deal to purchase the 17-unit Patxi’s Pizza from private-equity firm KarpReilly LLC. Terms of the deal were not disclosed.