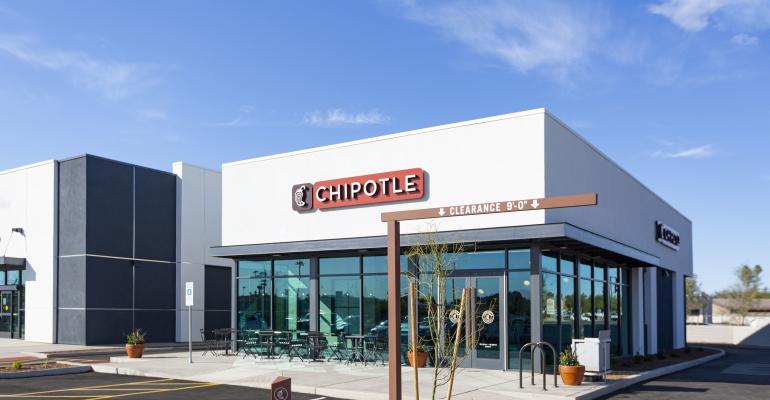 Photo courtesy of Chipotle
Chipotle has increased its menu prices by double digits throughout the past year, which has impacted traffic among lower-income consumers.
News>Fast Casual

Chipotle's menu prices are 13% higher than they were last year compared to the average food-away-from-home inflation rate of about 8%.

Chipotle has proved yet again that it is a relatively insulated brand in a volatile economy.

The company reported a 7.6% increase in Q3 comp sales Tuesday afternoon, driven in large part by higher menu prices to offset relentless inflation. Chipotle’s menu offerings are 13% higher than they were last year and about 20% higher versus 2020. The company’s pricing strategy is outpacing some of its peers in the industry. McDonald’s prices, for instance, are up about 9% on the year and 14% over the past two years. Food-away-from-home inflation on average is about 8% higher than last year.

Chipotle executives remain bullish on pricing, however, noting that the company is a relative value versus categorical competitors. A recent report from BTIG analyst Peter Saleh found that Qdoba and Moe’s have raised their entrée prices more aggressively than Chipotle since 2018, likely creating a years-long foundation for Chipotle’s value proposition in the category. Further, Chipotle was found to be more affordable than emerging fast casual concepts, like Sweetgreen, in similar markets.

“When you look at fast casual competitors, we’re anywhere from 10% to 20%, 30% less than what you see on their menu. Unfortunately, in this inflationary environment, everybody is taking price. So (our) value proposition remains strong,” CEO Brian Niccol said during Chipotle’s earnings call.

Executives also note that grocery inflation has far outpaced restaurants, which has worked in the chain’s favor. Indeed, food-at-home prices are up more than 13% from last year according to the U.S. Bureau of Labor Statistics.

“If you go to the grocery store, there’s a lot of inflation there, too. So, if you think of all the places where you can get food, they’re way up and our relative performance in that environment is one where we’re still a great cost opportunity,” Niccol said.

This backdrop has provided leverage for Chipotle to continue inching up on its costs with the goal of better protecting its margins amid the challenging environment. That’s not to say the chain isn’t facing headwinds, however. The increasingly bifurcated economy has made its way to Chipotle, as lower-income consumers rein in their visits. Foot traffic at the chain was up less than 8% in Q3, meaning the average ticket per visitor is flat at best given the 4% price increase in Q1 and additional 4% increase in August.

“Transactions were down roughly 1%,” Niccol said. “And we’re continuing to see some pressure on the low-income consumer, so we’re seeing transactions be pushed in that negative range.”

Although Chipotle tends to skew toward higher-income consumers, this drop off of lower-income consumers should no doubt be a concern. Niccol defines Chipotle’s high-income cohort as those making more than $75,000. The median household income in the U.S. is about $70,000, leaving out a big chunk of customers and potential customers for the chain as it continues to grow its footprint, including in small towns.

Further, consumers across the board are growing increasingly anxious about a potential recession and the Consumer Confidence Index fell nearly four points in October accordingly. This means Chipotle’s pricing strategy could eventually run out of steam even for high-income consumers, who have been known to cut back in a recessionary environment.

The chain’s executives remain optimistic, however, about maintaining pricing, and they have a strong proof point from the 2008-09 Great Recession to support their strategy.

“We’ve spent a bunch of time looking at what happened in the last recession or slowdowns and the good news for us is, yes, you had some low-income consumers step away, but we also had higher income consumers trade into our business,” Niccol said. “And then as economics improved, all cohorts came back to the business in a big way.”

So, just how high can Chipotle go on pricing without further eroding traffic? Bank of America predicts Chipotle’s will pull back on pricing once input prices stabilize and inflation moderates, which should also provide a traffic tailwind.

During the Q3 call, CFO Jack Hartung said the timing on normalization is tough to predict, but added, “It does seem like things are getting closer to stable now.”