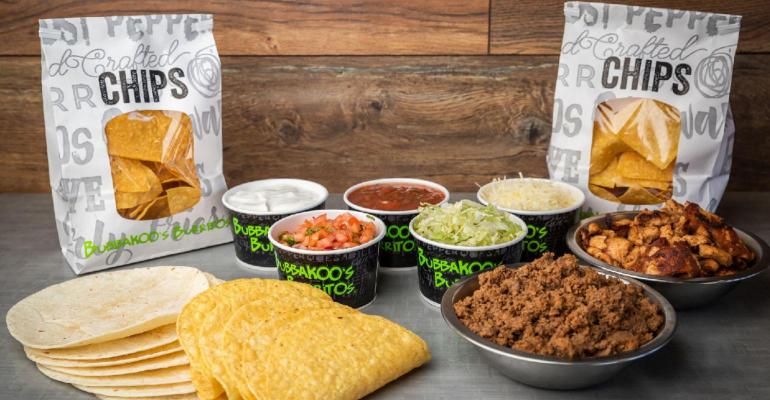 Bubbakoo’s Burritos, a surf and skate inspired Tex-Mex restaurant, held its first National Fundraiser on March 29th and raised over $15,000 for the Leukemia and Lymphoma Society.
News>Fast Casual

Bubbakoo’s Burritos partners donate over $15,000 to Leukemia and Lymphoma Society

Bubbakoo’s Burritos, a surf and skate inspired Tex-Mex restaurant, held its first National Fundraiser on March 29th and raised over $15,000 for the Leukemia and Lymphoma Society.

In 2008 Bill Hart’s wife’s cousin, Luke Krebs, passed away from Leukemia in Cleveland, OH at the age of 21.  Through the years Bill and his wife Kristen have personally donated to the Leukemia and Lymphoma Society in Luke’s name.  Kristen’s cousin Beth, Luke’s wife, has been heavily involved with the Cleveland Leukemia and Lymphoma Society chapter. She has worked to raise money to help families in need whose children suffer from the disease.

On March 29th Bubbakoo’s co-owners, Paul Altero and Bill Hart, along with their franchise partners, helped raise over $15,000.

“We are grateful to all our franchise partners and our customers for helping us raise money for the families that have to deal with this incredibly difficult disease” says co-owner Bill Hart.

Bubbakoo’s prides itself on their involvement in the community. In November of 2019, they launched their Read it to Eat it Program where they work with schools and teachers to help incentivize reading for students. The program now has over 500 schools/teachers involved and over 120,000 students. Many Bubbakoo’s locations also host fundraisers to help local organizations raise money and have raised over $200,000 for local charities.

The popular Mexican-fusion chain was founded in 2008 by industry veterans Paul Altero and Bill Hart in Point Pleasant, NJ as a place to relax after a session in the water or at the skatepark.  Both Hart and Altero had worked together previously and decided to combine their ideas to build a united dream. Their shared vision focused on the complete customization of entrees with fresh ingredients and a strong concentration on customer service. Bubbakoo’s Burritos has innovated a menu where customers can pick and choose what they want and create something different every time they visit.

Since their flagship location in Point Pleasant, the Bubbakoo’s brand has expanded significantly throughout the country. Currently, there are 71 locations across 10 states with over 100 more locations in the pipeline. The Bubbakoo’s team plans to open several more stores in the first half of 2022.

For more information about this topic, please visit https://www.bubbakoos.com/ or email [email protected]