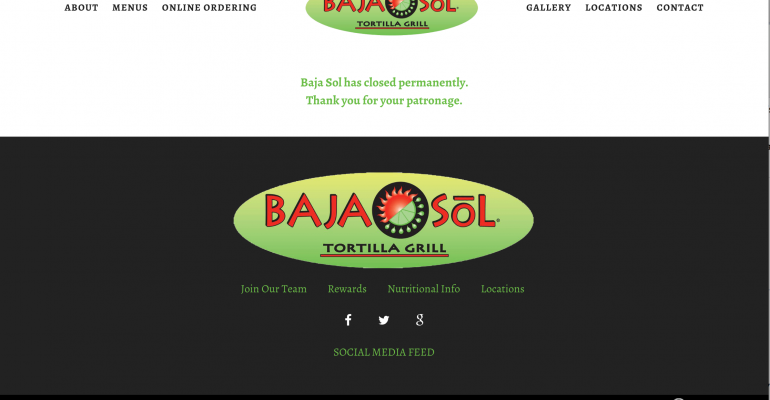 In the Baja Sol closure, a sign of things to come

Last week, Minneapolis-based Baja Sol Tortilla Grill shut the doors of all seven of its units with no public announcement and little, if any, notice.

Signs on the chain’s location in suburban Minneapolis simply said the location was "closed through Labor Day." The company’s website only recently said that the chain “has closed permanently. Thank you for your patronage.”

Such chain closures are relatively rare. But they may not be so rare for long, given the number of small chains out there, overall market saturation, rising lease and labor costs and continued pressure to add locations.

Baja was a typical fast-casual burrito chain, with a selection of burritos and tacos. Its main pull was free, self-serve tortilla chips and a salsa bar.

The company was founded in 1994 and had eight locations when it was sold to a group of investors in 2006.

First, a caveat: I have an affinity for Baja. I was introduced to the chain in the 1990s, and it was my introduction to the world of fast-casual Mexican. I knew Baja before I heard of Chipotle Mexican Grill Inc. or Moe’s Southwest Grill or Qdoba Mexican Eats. The chain’s giant, caloric burritos were a godsend to my younger male self.

At its peak, Baja had about 20 locations and acquired a Don Pablos franchisee. But the chain never quite took off. It stopped franchising, closed locations, and in 2013 its executives filed for personal bankruptcy, handing over control to other investors.

The ownership and executive changes hurt, and Baja made some questionable decisions in a bid to boost profits. Notably, it one time started charging for those free chips. (Note to fast-casual chains: Don’t give away free food but, if you do, don’t start charging later on.)

Baja tried strange brand expansions — it tried mini “express” units; at one point it had a location named “Baja Joe’s,” and it also toyed with dine-in “Cantina” units.

Mostly, though, Baja struggled to compete with those bigger chains.

Baja did not have the assembly line we’ve come to associate with burrito chains and its service could take longer. Theoretically, consumers stuffed themselves on those chips while they waited for their burritos.

Speed is a big deal. Consumers will wait for quality, but if somebody nearby offered similar or better quality, which was the case with Baja, consumers would go to those other, faster places.

This was frequently seen at the Mall of America, where the mall’s third floor food court for a time had a Baja, mere steps away from a Chipotle. The Chipotle always had a long line on busy days — far longer than Baja.

This is also a surprisingly difficult time for fast casual concepts. Publicly traded fast-casual chains performed worse than any other sector in the second quarter, and appear to be losing ground to traditional quick-service chains as consumers look for cheaper food.

That has led many chains to close locations and take a hard look at their businesses. Noodles & Co. earlier this year closed 55 locations. Pie Five Pizza closed 18 locations. Chicago-based Potbelly Corp. is putting its brand under a microscope. And Zoe’s Kitchen Inc. is slowing its development — all due to weaker same-store sales this year.

Thing is, though chain closures are rare, they appear to be growing in number more recently. My Fit Foods earlier this year shut down, closing more than 50 locations in five states. Chipotle shut down its ShopHouse Asian Kitchen concept.

Recent years have seen investors pour money into fast-casual chains. These chains have flooded strip centers, drove up lease costs and flooded a market for which demand was clearly overstated.

While Baja was an older player than many of these other chains, it clearly could not survive in the current market. It would hardly be a surprise if other small chains followed suit.