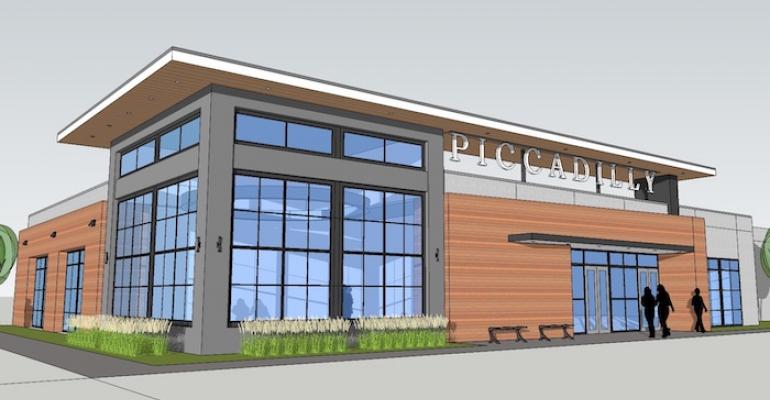 Piccadilly to open prototype in December

The Baton Rouge, La.-based brand said the 7,000-square-foot restaurant (architectural rendering above) will open Dec. 11 within the Juban Crossing shopping center just east of Baton Rouge and will serve as a prototype for future locations. It will seat about 190 and include a private dining-meeting room.

In addition to an open kitchen, the Juban Crossing location will offer such conveniences as Universal Serial Bus (USB) ports for electronics and a takeout area for guests on the go.

“The Juban Crossing prototype is a modern Piccadilly that still holds true to its roots,” said Aslam Khan, Piccadilly CEO, in a statement. “Guests can expect the same great hospitality experience, speed of service and freshly prepared food that Piccadilly is known for delivering. The updates we’ve incorporated in this new concept build upon that foundation.”

The menu will include such traditional dishes as carrot soufflé, fried chicken and Southern fried fish, along with newer items that include made-to-order entrée salads.

“This is such a meaningful milestone in our company’s history,” Khan said. “It’s been 87 years since the first Piccadilly opened in Baton Rouge. Now we’re on the cusp of opening a modernized prototype in the same metro area where it all began.”

Founded in 1944, Piccadilly has 40 locations in eight Southeastern states.