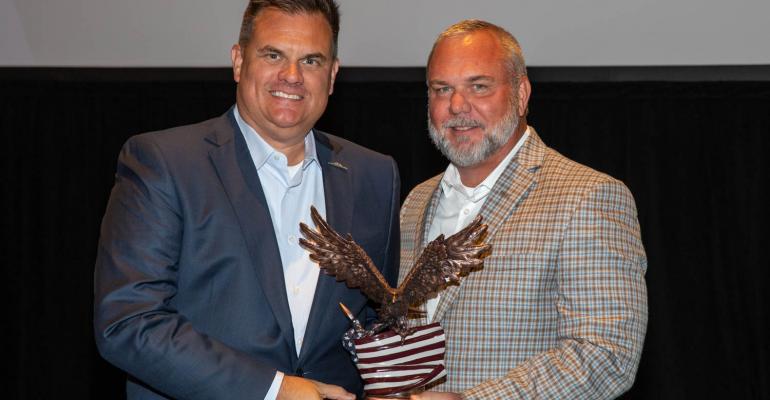 America’s No. 1 buffet and grill receives award for long-standing support of disabled veterans

Golden Corral is honored to announce that the company was named to the National Adjutant’s Circle at the DAV (Disabled American Veterans) National Convention on Aug. 4 for its 20-year partnership.

The National Adjutant’s Circle honors corporations and organizations for their exceptional support of disabled veterans. From what began as a company tradition to celebrate our nation’s heroes, Golden Corral has served over 6 million complimentary meals to military personnel and generated nearly $18 million in guest contributions to support community-based service initiatives for veterans through DAV every Veterans Day.

“It was an incredible honor for Golden Corral to be recognized by Marc Burgess, DAV CEO, with the National Adjutant’s Circle award,” said Chief Marketing Officer and U.S. Navy veteran Skip Hanke. “Our partnership with DAV is incredibly important to us, and we’re proud to consistently contribute to the organization’s mission. Our country’s heroes have earned and deserve the exceptional support that DAV offers them each and every day. I want to thank not only DAV, but also all of our Golden Corral franchisees, whose consistent commitment to veterans over the years made this award possible.”

Founded in 1920 and chartered by the U.S. Congress in 1932, DAV is a nonprofit organization with more than 1 million members dedicated to keeping America’s promise to veterans. The organization fights for the interests of America’s injured heroes on Capitol Hill, educates the public about the great sacrifices and needs of veterans transitioning back to civilian life, provides employment resources to veterans and their families, and ensures veterans and their families can access the full range of benefits available to them. To learn more about DAV, visit DAV.org.

The annual national convention was held Aug. 6-9 to discuss the critical issues facing the veteran community. DAV recognized 36 individuals and corporate donors for their support of disabled veterans during the Dinner of Gratitude at the Hyatt Regency Orlando in Florida. Along with Golden Corral – America’s No. 1 buffet and grill – Chisholm Chisholm & Kilpatrick, TriWest Healthcare Alliance and USAA were also named to the National Adjutant’s Circle.

About Golden Corral:
Founded in 1973 and based in Raleigh, N.C., Golden Corral is the nation’s largest grill-buffet restaurant chain. Golden Corral strives to make pleasurable dining affordable for all families. While its commitment begins each day with preparing delicious food, Golden Corral also believes in providing outstanding hospitality and giving back. Service to others is a hallmark of the Golden Corral brand. Golden Corral restaurants nationwide have long been strong supporters of the U.S. Military and DAV (Disabled American Veterans). Golden Corral is also the founding sponsor of Camp Corral, a 501 (c) (3) tax-exempt, nonprofit corporation, which provides free, one-of-a-kind summer camp experiences for children of wounded, injured, ill or fallen service members. For more information, visit goldencorral.com and follow Golden Corral on Facebook, Instagram and Twitter.

DAV empowers veterans to lead high-quality lives with respect and dignity. It is dedicated to a single purpose: keeping our promise to America’s veterans. DAV does this by ensuring that veterans and their families can access the full range of benefits available to them, fighting for the interests of America’s injured heroes on Capitol Hill, providing employment resources to veterans and their families, and educating the public about the great sacrifices and needs of veterans transitioning back to civilian life. DAV, a nonprofit organization with more than 1 million members, was founded in 1920 and chartered by the U.S. Congress in 1932. Learn more at DAV.org.