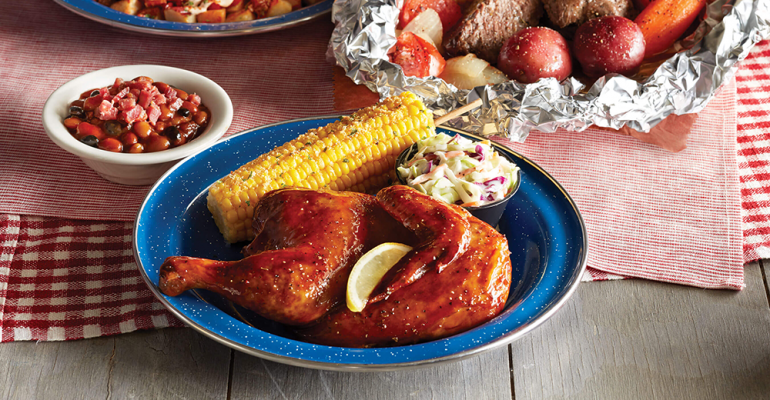 The company began testing bone-in fried chicken last fall. It is currently available in 45 stores, but CEO Sandra Cochran said the rollout will be accelerated to reverse disappointing quarterly sales, especially during dinner. Stores selling the four-piece fried-chicken platter, which comes with two sides and bread, will more than triple to 170 by Thanksgiving.

The rest of the chain, roughly 660 restaurants, will get fried chicken by next summer.  “Our timeline is aggressive,” Cochran said.

In early tests, “we are excited about how much the guests love it,” Cochran said.

Cochran blamed several factors for the declining traffic including lack of interest in new meals promoted in the brand’s three-year-old “Campfire” summer menu and high gas prices. The latter reduced visits in key states, she said.

“The softer sales trend we saw in May persisted throughout the quarter, leading to fourth-quarter results that fell below expectations,” the CEO said in a statement. “Our traffic was challenged, particularly with lighter users and during the dinner daypart, some of which was attributable to our menu and marketing promotion not delivering the anticipated topline traffic and sales.”

Besides fried chicken, Cochran outlined several other initiatives to boost sales including expanding its delivery footprint and catering options, shifting marketing messages to menu value and improving the guest experience.

During a Tuesday conference call with investors, Cochran said Cracker Barrel needs to refocus marketing on “everyday value” as a differentiator for the brand, which has been hurt by rivals focusing on promotional pricing.

The company was unable to estimate losses tied to Hurricane Florence, which impacted roughly 37 stores. Most of those stores have resumed regular operating hours except five locations which remain closed.

Three of those were expected to open by the end of this week.