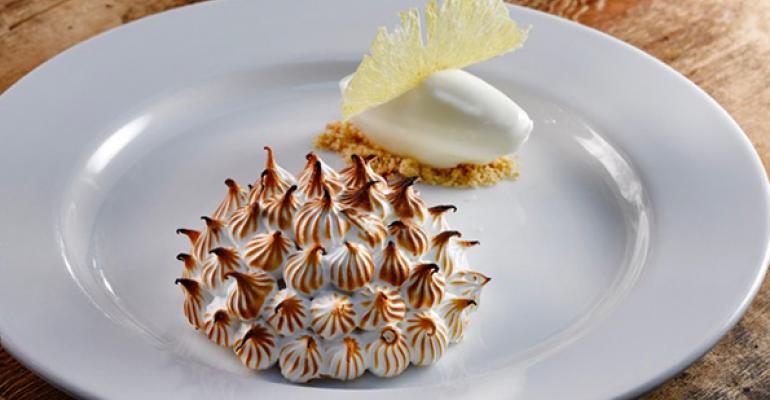 Miniature desserts have been growing on restaurant menus since 2005, spurred in part by diners’ desire to enjoy a sweet treat while watching their weight. While it’s unclear if downsized desserts have helped shrink Americans’ waistlines, they have helped expand some restaurants’ bottom lines.

According to the latest research from Datassential MenuTrends, miniature desserts appeared on nearly 12 percent of all menus in 2014, an increase from about 6 percent in 2005.

Cupcakes, cookies and brownies are still the most commonly menued miniature desserts items. However, over the last year, miniature pastries, cannoli and cakes have shown the strongest growth.

At Delicatessen in New York City, which specializes in international comfort food, small desserts are big business. Executive chef and partner Michael Ferraro serves a number of shrunken favorites, including a three-inch version of the birthday cake that you might have loved as a kid, complete with vanilla cake, white icing piped-to-order and pastel confetti, and a Lemon Meringue Bombe, a tiny lemon meringue pie that is covered in meringue and brûléed to order, and served with pineapple sorbet and pineapple chips.

On a weekend night, the restaurant typically sells about 30 of the birthday cakes, priced at $12 each, and about the same number of the Lemon Meringue Bombe, priced at $10 each.

“You get your dessert like you just bought a [whole] cake, [but] smaller,” Ferraro said. “It’s fun. It’s practical for many reasons.”

Minis are practical because they are less wasteful, compared with slicing full-sized cakes and pies, Ferraro explained.

“Through sales, we know within one or two cakes what we’ll sell for the day,” Ferraro said. “If one is left over, it’s not as much of a waste.”

The restaurant began offering minis about five years ago, and interest hasn’t slowed down yet. Robert’s owner Michael Landgarten said customers love the minis for their portion control, because “just about everyone is watching their weight.” He also likes them because they sell well.

“Bite-sized are always our top sellers,” Landgarten said. “They sell better than the full-sized.”

At North End Grill in New York City, pastry chef Tracy Obolsky makes miniature Lemon Meringue Donuts served with housemade honeycomb candy and blueberry compote. The brioche dough is made in-house and fried to order. The warm doughnuts are filled with lemon curd and topped with meringue that is then torched.

The 124-seat restaurant, part of Danny Meyer’s Union Square Hospitality Group, serves about 10 orders of the petite doughnuts, priced at $10, on any given night. The restaurant credits the dessert’s diminutive size for helping drive sales. It’s easier to share, and guests don’t feel as bad eating just one, rather than indulging in an entire dessert by themselves, a spokesperson said.

Lexington, Ky.-based Fazoli’s is also having success with miniature doughnuts. Although the Italian Donuts are the most operationally intensive dessert on the fast-casual Italian chain’s menu, they are worth it, according to Jon Quinn, Fazoli’s vice president of marketing.

The made-to-order doughnuts, covered in granulated sugar and served with a wildberry fruit purée for dipping, have been popular with diners, and have remained on the menu for the last two years.

“The sharability is a big draw for the Italian Donuts,” Quinn said. “Guests can share a sweet treat after dinner for the whole family without feeling too overindulgent, and the dipping sauce adds a fun element — everyone likes to dip.”