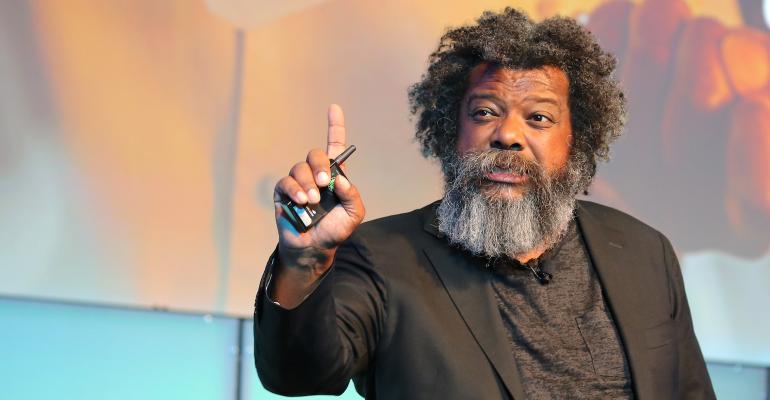 Restaurant operators serve customers distracted on many levels, from smartphones to daily life, and they need to find hacks to break through the clutter, according to marketing expert, investor and author Bonin Bough.

Bough, who gave the “Hackonomy 2.0” keynote address Tuesday at the second annual CREATE: The Future of Foodservice, a gathering of restaurant leaders presented by Nation’s Restaurant News in Denver, Colo.

Related: The secret to being people-first in a touchscreen hospitality industry, according to CREATORS award winners

“I think people forget that creativity is the largest unlock of attention,” Bough told the last day of the event, urging operators to look at their businesses to make sure they have room for that inventiveness and originality.

Bough, who currently serves as chief growth officer of Triller and host of CNBC’s Cleveland Hustles, is also the author of “Txt Me (646-759-1837),” a book that promotes the use of text messaging as a marketing platform and includes his actual mobile phone number in the title.

“I think the restaurant industry right now is going through transformation,” Bough said, citing the growing number of virtual restaurants available on third-party delivery platforms. “I know it seems scary.”

Bough said one the biggest transformations has been those virtual brands that can employ underutilized assets and capacity in kitchens, and that give restaurants an opportunity to fight differently in the marketplace.

Bough had experience in growth for food and beverage brands as an executive at Mondelēz International and PepsiCo. He has been named to the Forbes 40 Under 40 list, Fast Company’s 100 Most Creative People in Business and Ebony’s Power 100.

He was involved in such campaigns as the Honey Maid graham crackers’ “This Is Wholesome” effort, which drew criticism in some quarters for its interracial and same-sex couples, and the gay-rainbow-filled pride Oreo.

Bough said restaurant operators can evolve their businesses to connect with consumers in a rapidly changing digital world.

Restaurant operators must find ways to break through the clutter that customers are facing, he added.

“We have become the most distracted society in human history,” Bough said, “but people will never admit they're distracted.”

With smartphones and other communications devices, society has tried to become adept at multitasking. But multitasking divides attention.

Bough cited a study by the American Psychiatric Association that looked at performance of mobile phone text users compared to marijuana smokers and found the latter group’s result was twice as good as the former.

“If you take anything from today, it’s that you're better off being a pothead,” he said with a laugh.

The COVID pandemic proved that companies, especially those operating restaurants, can shift quickly to accommodate changes in business conditions.

“The thing that I took away from it is how resilient humans can be,” he recalled. “We had to change overnight. We didn't have a choice.”

That innovation serves businesses well, even when not dealing with the changes caused by a pandemic, he said.

“The most important thing I've learned,” Bough noted, “is that you have to immerse yourself in the process of innovation.”