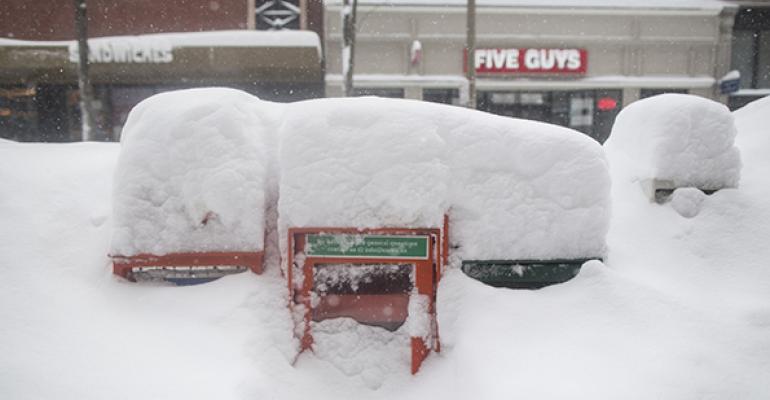 <p>Snow covers downtown Boston in February. Sales at restaurants and bars in the city fell 1.2 percent in January and February, as the area was pounded by a series of snowstorms.</p>
News

Boston consumers opted to stock up on groceries and visit restaurants less often during recent snowstorms, but they avoided spending on just about everything else, according to a report from payment technology firm First Data Corporation.

According to the report, which examined sales at 25,000 merchants in Boston, spending there fell 6.2 percent in January and February, when a series of snowstorms pounded the region. By comparison, national consumer spending rose 1.5 percent during the period.

The restaurant industry fared better. Sales at restaurants and bars fell 1.2 percent in January and February. But sales at grocery stores increased 7.9 percent.

“While Boston always experiences cold winters, the severity of the storms this year resulted in a major decrease in consumer spending, particularly in merchant establishments that rely on foot traffic or available parking,” Krish Mantripragada, senior vice president of information and analytics solutions at First Data, said in a statement.

First Data’s analysis compared spending during the peak snowfall from Jan. 24 through Feb. 22 to the same period in 2014. Boston had 64.8 inches of snow in February, its snowiest month on record, according to the Weather Channel. This year, Boston has had 105.7 inches of snow, its second snowiest winter on record.

First Data looked at merchants in the Boston area and all of New England, and it analyzed spending at more than 4 million merchants nationwide.

Boston was hit harder by the storms than the rest of New England, where spending decreased 4.4 percent, year-over-year. The biggest decline came during Winter Storm Juno, between Jan. 26 and 28, when it dumped 20 to 30 inches of snow on Boston and surrounding cities.

Restaurant spending in January and February was considerably different from a year ago, when spending rose 7.5 percent in the Boston area, according to First Data.

It’s also much lower than national restaurant sales, which have been flourishing amid lower gas prices and rising employment, as well as better weather everywhere else but New England.

Snowstorms force temporary restaurant closures and keep people at home. But everybody eats, and hard work shoveling snow often yields demand for pizza delivery and restaurant use. But consumers were clearly not spending on anything else. According to First Data, spending on furniture and home furnishings fell 14.7 percent. Spending on clothing fell 6.3 percent.