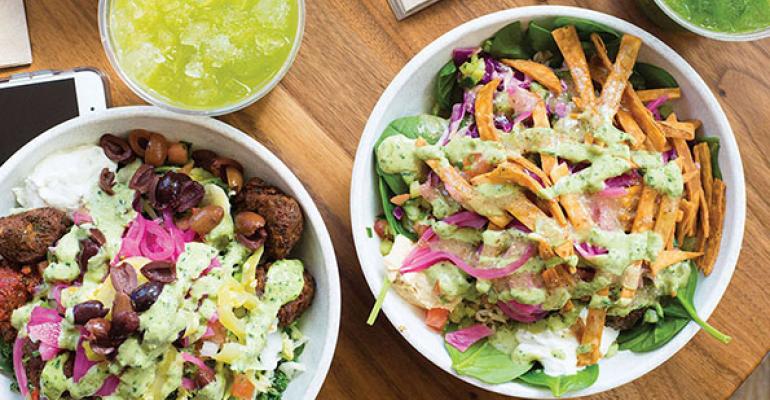 Cava Group, Inc., on Thursday said it has received a new $45 million investment to fuel the growth of its Mediterranean food chain Cava Mezze Grill on both the East and West Coasts.

The Series B funds came from private equity group Invus, along with the company’s existing partner, Swan & Legend Ventures and the venture capital firm Revolution Growth.

“We’re thrilled to have the support to help us with significant initiatives in the next year,” Cava CEO Brett Schulman said in a statement. He said the company would use the funds on technology for operations and the customer experience, and to build its team to fuel growth along the coasts. The company also plans to open a new production facility to expand its dips and spreads in natural and organic markets.

Cava Mezze Grill, named a Hot Concept at the MUFSO conference this week, has 11 locations in the Washington, D.C. area and is set to open the first of several restaurants in the Los Angeles area this month. Cava products are also sold in more than 200 Whole Foods Market locations along the East Coast and in the Midwest.

“Our mission is to empower entrepreneurs to transform their industries,” Benjamin Felt, director at Invus, said in a release. “Within the healthy fast casual movement that is sweeping the country, we believe Ted, Ike, Dimitri and Brett have built a differentiated concept that can stake out a leadership position. We’re excited to partner with Cava for the road ahead.”

This is the second major funding round for Cava, which received a $16 million Series C round in the spring from Swan & Legend and other investors.

The funding also continues a broader trend of investment into startups. Newer restaurant chains have access to more funds than they ever have as private equity and other investors look to get in on potentially hot concepts early on — and as larger opportunities opt to go public.

“This financing represents another major milestone in Cava’s remarkable growth,” Todd Klein, managing director of Swan & Legend, said in a statement. “We look forward to working with our new partners and management to bring delicious, nutrient-rich food to consumers nationwide.”

Correction: Sept. 24, 2015 A previous version of this story misidentified the funding round Cava Mezze Grill received in the spring. It was a Series C round.