But number of those eating less often at Chipotle remains high, survey says

Consumers are less worried about food safety at Chipotle Mexican Grill, but it could be well into 2018 before the chain’s average unit volumes return to near “pre-E. coli” levels, according to a Wall Street analyst research note Thursday.

In the latest monthly survey of about 800 adults by Sharon Zackfia of William Blair, 60 percent of respondents in October said they were “not worried at all” or “not very worried” about food safety at Chipotle, the highest rate since surveys began in January. 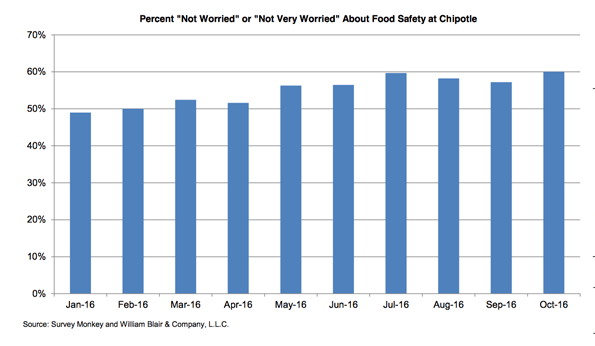 Meanwhile, the percentage of those “very worried” has stabilized in the 12 percent to 14 percent range since June, down from a peak of 21 percent in January.

“Chipotle continues to struggle with regaining pre-E. coli frequency among its most loyal customers, as nearly two-thirds of customers who historically ate at Chipotle at least once per week are now visiting less often,” she wrote.

And those who have not eaten at Chipotle at all since the foodborne illness outbreaks last year, whom Zackfia calls “rejecters,” remains at 24 percent, similar to the last two months but less than the near 30-percent rate earlier this year.

When asked why they are eating less at Chipotle, food safety topped the list of concerns at 56 percent.

Some respondents said they found other brands they also like, and others said they were not eating out as often. Zackfia was encouraged to see that “food doesn’t taste good” or “tired of the menu” ranked relatively low. 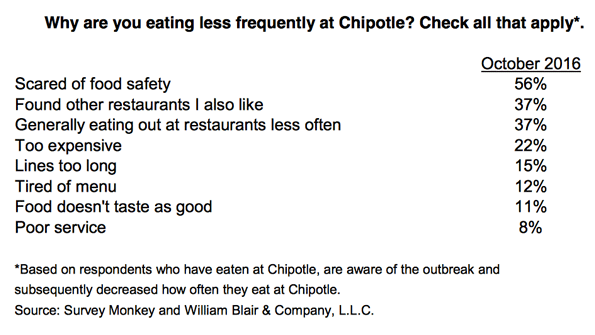 Zackfia said she believes a more comprehensive marketing approach will help Chipotle, including select use of television. Chipotle is looking for a new ad agency, though the Denver-based chain’s current agency is also in the running, she noted.

For the third quarter, Zackfia estimated same-store sales will be down 19 percent, or better than the 23.6-percent decline of the second quarter this year. The chain is scheduled to release third-quarter results on Oct. 25.

By the fourth quarter, comparable sales will be down in the mid-single digits with traffic inflecting into positive territory for the first time since the third quarter 2015, Zackfia predicted. Those estimates don’t include any potential penalty from deferred revenue related to the Chiptopia summer loyalty program that ended in September, she said.

Zackfia expects average unit volumes to rebound to roughly 85 percent of pre-E. coli levels in 2018. She also sees the opportunity for Chipotle to raise prices in 2017 and cut inefficiencies in labor.